One of the things I use Kinopio for is to run my team retrospectives. And one of the exercises we do after we brainstorm is called “dot voting.” In the physical world, this would be taking sticky dots and putting them on groups of post-it notes. For a while, I had tried to leverage Kinopio connections to accomplish this, but it was too hard to count (though it was pretty fun to see connections fly everywhere in real-time).

Just wanted to report that I tried using a single card with a [[vote]] tag in place of a dot, and it worked well! It was visually distinct and concise, so browsing the space made it easy to see which piles got the most votes. 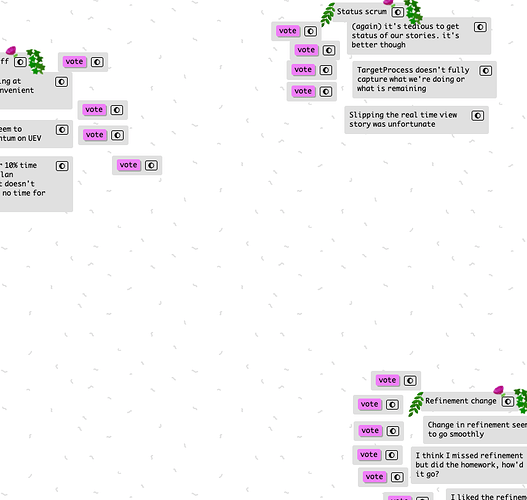 oh what a cool idea, I might make a tweet based on that. If you have any public spaces with this in use def let me know so I can link to an irl example

I would be honored for a tweet. Let me sanitize a live space where we did that so it can be shared with the world

Here’s a space where we did a retrospective activity that included dot voting. Feel free to share!