API placement when providing X but no Y

Mentioned this previously, but forgot to post. With the new Inbox behaviors, the API placement has gotten worse for me as someone who provides an X value (I have two different methods that place at two different Xs).

Kinopio used to handle this well where it would basically place a card under anything already existing at that X.

Now the first card sent works that way (Apple), but then every following card ends up higher stacking on top of each other a little higher than the first card.

Here is what that looks like,the first card, Apple, is very visibly, but the other five cards are all clumped up top where you see orange. Here’s a shot with the weather card moved for better visibility. And here’s a final shot aligning all the cards that were in that clump to show how many there were. can you send me some examples of the POST requests you use that lead to this? if I can repro this case exactly, that’ll help me figure out the best solution 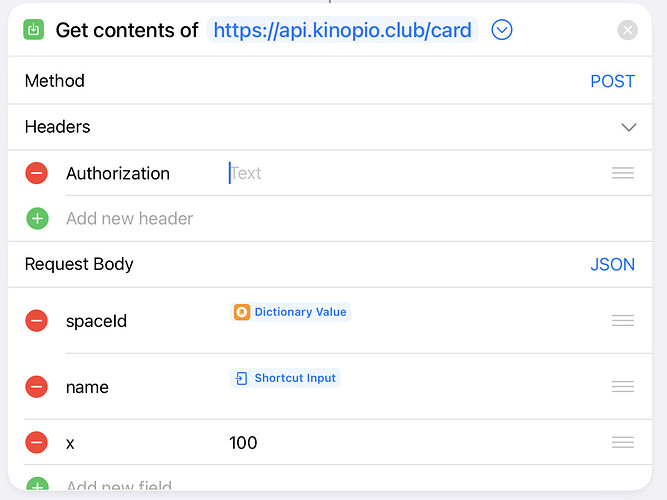 Obviously I typically have the Authorization filled in… then the spaceID and name are values that the shortcut comes up with (never have any problem getting the cards into the right space.)

The first card always comes through at about x100, y100 (Apple in the previous post) and then every subsequent card that gets sent goes to about x100, y50 (Orange and all the cards behind it above). If I then go to the space, move the cards, the cycle starts over, placing the first one at 100x100 again and then everything else to 100x50.

(The positions I listed above are just guesses so hopefully it helps illustrate and doesn’t confuse.)

The expected behavior was it would find an anchor somewhere along the y at x100 and then cascade every subsequent card from where ever it decides to start. I swear this would perfectly for me with the old behavior where they would stack vertically.

thanks for the details, this helps a lot thx