Had a spur of the moment idea for some simple card comments. Just type (( to make a ((comment))

Card comments appear a little differently and quite a bit smaller than normal cards, letting you give feedback without feeling like you’re ‘intruding’ on the original space.

It’s basically like a regular card under the hood so you can still do stuff like add checkboxes and frames.

It’s live now so you can try it out in your own spaces.
What do you think? 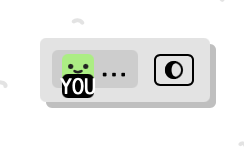 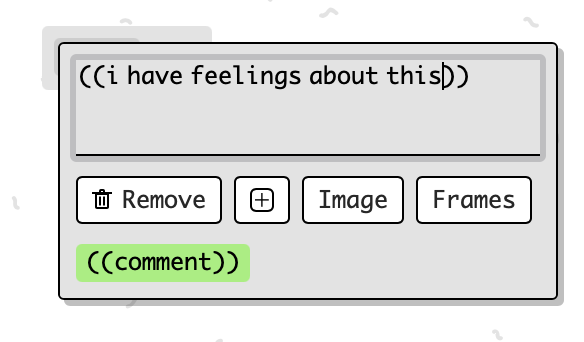 currently trying to using it as such in my personal to do/mind map space for extra details.

when i saw this post i thought that whatever is in the brackets would be the comment and that will be automatically added to the bottom of the card instead of creating a new one.

think of comments as another type of card, that says ‘hey i have a comment inside me’

what do you mean by collapsable?

that’s a good use of it, tell me how it goes

what do you mean by collapsable?

first, I love that you are willing to try experiments like this for users to trial. here are my impressions so far:

My thoughts on what comments could be:

without feeling like you’re ‘intruding’ on the original space.

because commenters can confidently create cards, do whatever, knowing that the creator can easily ignore them because they would have the ability to hide them or work with the space in such a way that they don’t get in the way.

Thanks all this is really helpful feedback!

I’ve got some ideas on how to minorly rework the card to be more visually ‘comment’ implying.

re the ‘content on the front’,
I’ve heard both sides of this, with the other being hiding the content of the comments encourages me to write longer comments because being smaller feels less intruding. Hidden comments also matches the conventions used for spatial commenting in apps like figma (pictured below) 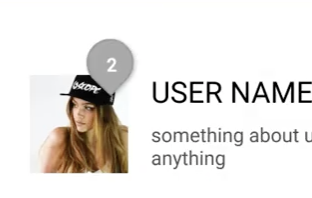 Also, apps like notion and trello also show comments as a ‘sub’ thing that you have to click to see

I would want an easy way to hide all comments

I can add a filter for that, in terms of locking interactivity I can adjust that once we have more irl scenarios with lots of comments on a space that get in the way (in practice, ppl may end up just deleting comments that have been resolved).

the examples from figma, trello, and notion aren’t entirely applicable in my opinion:

The current comments implementation is not tied to a card, it is not hierarchically or visually sub a card. It works for the other systems because 1) these interfaces support threading and collecting more than one comment, and 2) tying comments to the content keeps the comments out of the way and makes them easy to manage. If you delete the content, all the related comments go away.

But kinopio is a different paradigm where comments are at the same level as cards. That makes them much more flexible and perhaps powerful, but you lose manageability and the mental model is more ambiguous. Comments won’t always be in the context of what you’re commenting on. Is the comment on the space? On something abstract? Or about the card it is closest to? Or the comment card that it is next to?

Yeah, I can see that. I think being able to see multiple comments at once is a big use case for when you’re trying to garner feedback about something. The example from Figma indicates there are two comments. But the current K way doesn’t allow for that.

Stepping back a bit to absorb. So there seems like two contexts in which comments are used generally:

I also suspect people will naturally use comment position to impart meaning and relatedness.

You can connect cards to comments with connection lines (same as cards to cards), or use spatial closeness

Yes, with the addition that the comment leaver and reader could be the same person. If I am editing my paper, I may want to leave comments/notes to myself that are not part of the main text.

You can connect cards to comments with connection lines (same as cards to cards), or use spatial closeness

Agreed. I think if they were tied more tightly/conceptually, it would solve the “not be so intrusive” problem, too. In the current scheme, if I’m the space maker, and people leave comments connected to my cards, and then I rearrange my cards, the burden would be on me to also move the comments spatially to keep things tidy. And for comments that are only close spatially, it would be more tedious because I’d have to either be precise when I select the card(s) I’m moving, or remember where the comments should go.

Another approach would be to have the comments tightly bound to the cards themselves. This is what we see in most other apps where comments are part of the cards/entities (like in Trello).

Stepping back a bit to absorb

comment leaver and reader could be the same person

3 Potential Ways to Handle these Scenarios ^

Note for the next two: displaying comments content increases the width/height of the card and updates the attached connection path lines. Therefore, the same comment content visibility state must be shared by all space users. 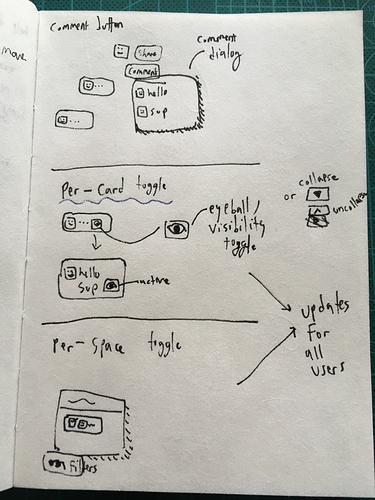 Of these 3, I lean to #2 (per card toggle) as the best overall fit for all use-cases

I think if they were tied more tightly/conceptually, it would solve the “not be so intrusive” problem, too. 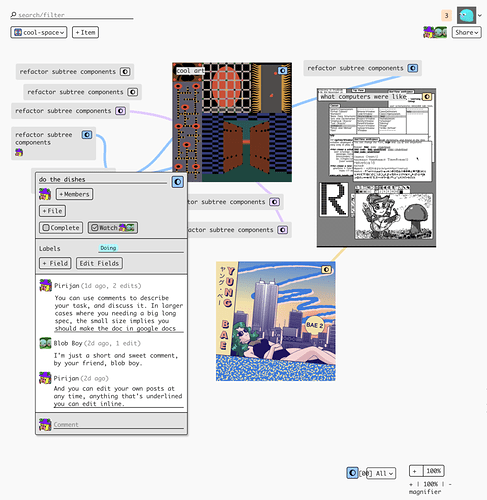 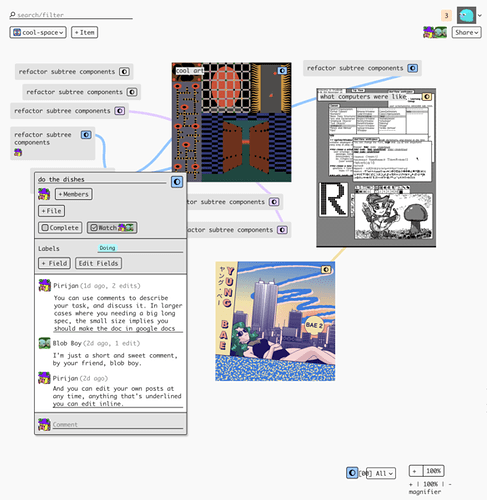 sort of a collaborative mind-map, but hopefully less fidgety and more practical than normal mind-maps 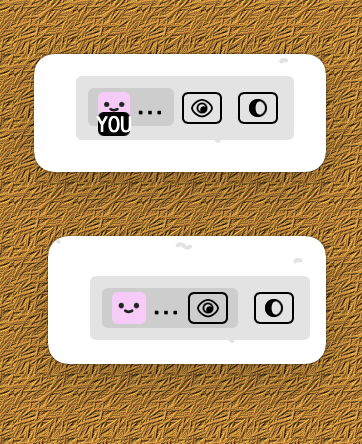 Think it’s better to have the toggle on the left side so that it’s position doesn’t shift when you expand the comment. Still rough but looks like this so far.

actually think the button is easier to manipulate when fully left 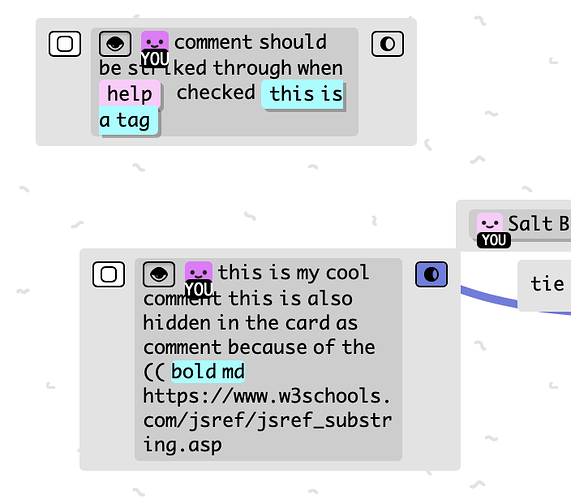 updated with whitespace and checkbox support

just shipped it, lmk how it goes

thanks for the quick turnaround and will be checking it out. my one impression so far is that, due to the additional hide/show button, user avatar, and darkened background, comments end up looking/feeling more weighty than actual content. This seems slightly counter to the desire to make them less obtrusive.

another situation/context for you to consider: take the

Kinopio Roadmap space. It’s a public roadmap for your product. It would be an interesting candidate to open up to comments so people could provide feedback on upcoming features, ideas, or even suggest some. but you wouldn’t want to open it up that people could add whatever cards they want and mess up the space. So here’s a case and reason why having a way for the creator to easily filter out comments might be useful.

And maybe this doesn’t just apply to comment cards per se. Maybe it’s more, you have a commenter role, so anything this person makes is considered a comment that can easily be ignored or hidden away. just my thoughts

comment only sharing is something I’ll consider in the future, for now I prefer to see how people use commenting

I experimented with removing the dark badge from the comment, but it didn’t feel distinct enough from regular cards. 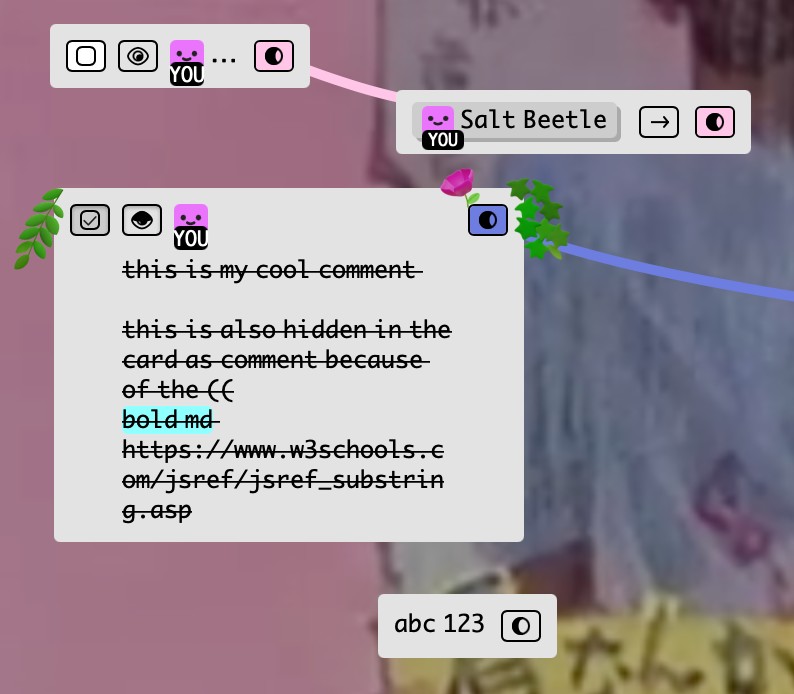 Instead I just lightened up the toggle button

in the expanded state I added the full username, which also makes that state Less subtle. My assumption rn is that condensed comments should be less obtrusive, and expanded comments are okay to be more obtrusive (because you’re more likely taking action on them at the moment)