Brainstorming: How to make styling with color quicker? (idea)

Maybe it is a silly idea but I am somehow unhappy with how many clicks it makes to style a card.

So, what if one could click and hold the select color button, it would get a simple color selector, one would pick the color (while still holding the button) and when the button would be released, the color would be selected and the selection dialog would be closed? 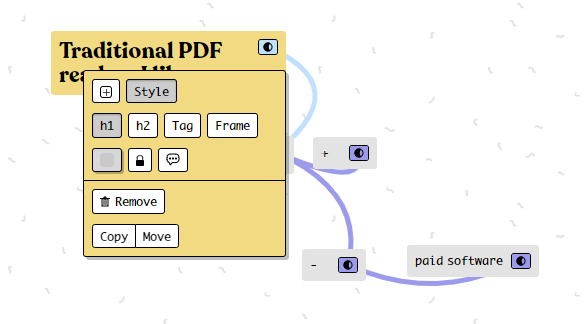 i can look at ways to make color selection faster,

in the proposed case what if you were holding down the mouse button but then needed to click another button in the color picker (eg to shuffle more colors)?

one way to do this might be to paint over card(s), then hit ‘c’ (for Color) as a shortcut to open the color picker. Using this pattern I could also have stuff like

I dig the shortcut idea for the buttons.

However, wouldn’t the above solution of clicking and holding to select a color really only save you one click?

It sounds like closing the dialog is included in the proposed solution above, but the dialog will automatically close on your next action anyways already…

Since we’re talking about a power user only feature, 1 click perhaps matters if you’re doing it enough. but also keyb shortcuts are more of a common convention, while click and hold is less of a standard thing and you can’t do it with all kinopio buttons. It also introduces ui issues related to the fact that normally buttons activate on mouse up, but click and hold implies activation on mouse down.

To throw in another use case for changing card colors: I can see cases especially in multiplayer mode when you are generating ideas on a certain topic, and you might want all those ideas to be a specific color. Here’s where, in other design apps, you would be able to pick your card color from a palette, and then every card you create would be that same color. We have a similar paradigm for “Use Last Connection”.

Another similar use case in multiplayer is if you want every player to have a specific card color to easily distinguish. It would be a lot easier if you could lock this color, rather than having to adjust card color after you create cards.

Maybe you don’t want to solve for these now/yet/ever—just putting it out there. I don’t use card color much individually, but I’m starting to see how they are more useful in group spaces, or larger spaces where you’re trying to organize a lot of things.

Just a FYI in case you missed it, but if you hit ENTER from a card that has a color, the following card will share that color. Doesn’t get to exactly what you are touching on, but it’s a step in that direction.