For consideration: Create a box around selected cards

Maybe it would be too much for the UI/UX?

What if we could select elements and then create a box around them? Maybe the “draw box” button could have this function when clicked while elements are selected?
Just brainstorming. 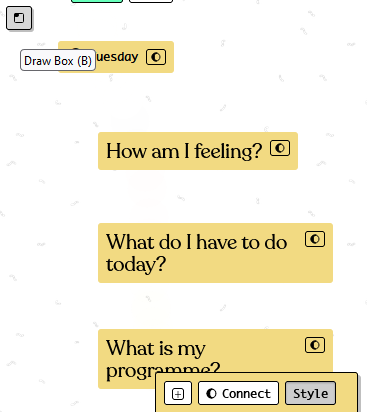 The icon of the “draw box” could probably slightly change when elements are selected - this would indicate another function. Just thinking :).

Related: @bentsai has mentioned in the Discord the idea of boxes adapting to new cards getting added.

So once Kinopio knows the set of cards within, if a new once gets added, it could resize a bit to accommodate additional cards.

It’s also a bit related to the List idea where it would allows easy reordering of cards that are aligned (within a box, potentially) so not only could the box size adapt, but the cards aligned within could adapt and adjust if a card is dropped in-between two previously aligned cards (or moved out of the alignment and the other cards could automatically realign to close the new gap from the removed card).

I think for the majority (80%) of uses of boxes, I am defining a container for a certain set of cards. If I add cards to this set, I will readjust the size of the box so they fit. What I’m trying to say is, even though the data model defines boxes with x, y, width, height, most people are using them to establish hierarchy and apply semantics to cards.

These various feature requests (Lists, auto-adjustment of boxes, select cards and surround with box, etc) are aimed at making this activity easier.

So once Kinopio knows the set of cards within, if a new once gets added, it could resize a bit to accommodate additional cards.

These various feature requests (Lists, auto-adjustment of boxes, select cards and surround with box, etc) are aimed at making this activity easier

Agree, the original comment sort of felt like a prerequisite for the stuff Ben and I have touched on in terms of recognizing a set of cards to build the group around and determining the spacing around that set of cards.

the ability to create a box around selected cards is now in beta. This replaces the old ability to turn a card into a box. The rationale being that now the same box icon in the ‘style’ options area will do the same thing (create a bounding box), whether you have 1 or multiple cards selected

unless bugs are found, this’ll likely ship on monday