There is something weird with comment cards and notifications. I got a notification for comment card that I created. In the email, it had the name of someone else as the author. Also, the search dialog, it also initially indicated that another user updated that card. When I visited the card in the space and toggled the comment visibility, it corrected the author back to me.

so maybe the bug is that when another user opens a comment, it changes them to be the last updating user?

the user might have edited the card, and cmd-z undid their edit? opening a card doesn’t change card.nameUpdatedByUserId, but a single edit would.

I’m thinking of changing collaboration so that the Creator of a card is Always the one associated with the card (eg who you see when filter 1 is active). But when you click the card:

what do you think/

for this. I cannot think of an instance where I’ve wanted the non-creator here. Practically/socially, when someone edits someone else’s card, it is to fix a typo or make a minor edit and never to change the essence of a card. I can think of contrived examples, but your proposal makes sense.

should I always display the card creator in the carddetails? This might be extra in single player spaces though

I prefer this option. I agree it would be redundant in a single-player space, but since it is under card details, it doesn’t add to any general noise. And it avoids the confusion of it not being there, as you note in bullet 2. There’s even more confusion if you made a space public, had some edits from others, then made it private again. Just saying, it’s probably better that it is not hidden conditionally.

working on a feature that lets you toggle on card ‘collaborator options’. This exposes a comment button toggle and shows you 1) the creator of the card, and 2) the last user to update it 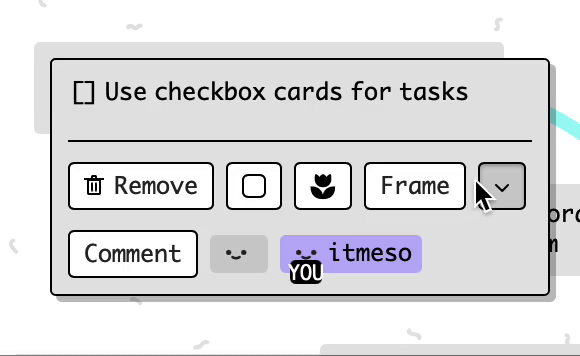 working on a feature that lets you toggle on card ‘collaborator options’. This exposes a comment button toggle and shows you 1) the creator of the card, and 2) the last user to update it

this will be fixed in the upcoming collaborator info