I am sharing a new “board” with my family for home ideas but my wife only uses iPhone / iPad and it’s been a bit klunky. Sharing from photos app is tricky as you have to know the side by side mode and also often the UI will scale in strange ways.

as you have to know the side by side mode

what do you mean by this?

often the UI will scale in strange ways

can you provide specifics on this? there are def some ui issues on mobile right now but I’m not sure if there’s something specific related to image sharing here

→ side by side on iPad, you can have split screen or have the second app hover over the main app to the side: 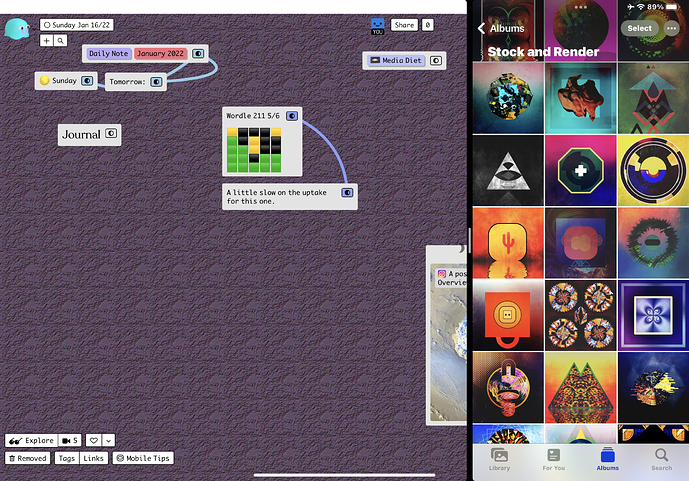 I notice the UI stuff get wonky at times too. Haven’t really noticed (or paid close attention) to what the root cause could be. The UI components (space selector, tag, links etc.) can sometimes blow up in size and end up in the middle of the screen.

i have some theories on this being related to the time it takes for the on screen keyboard to animate in and out, but i’ll need to investigate more to know for sure

→ side by side on iPad

But why do you have to use side by side mode to import photos? clicking a card -> image -> upload should also work

That works, but I drag in photos from safari, mymind, and other apps too. And when I want to do a few images, it’s easier to pull Photos up and drag and drop them in.

hmm is this a kinopio bug or an ios bug i wonder?

but I drag in photos from safari, mymind, and other apps too

oic, that makes sense so i’m glad it works. I can’t really control that the ipad os side by side mode is hard to find though (that’s on apple)

is this a kinopio bug or an ios bug

I’ve always assumed it’s iOS because I feel like I’ve had this issue in other apps too (both trying to bring up the iOS dialog (i.e. your “Upload” button) and with the iOS dialog itself. To add on, sometimes when you get the iOS dialog, click “From Photo Library”, it’ll open the library image picker all the way in the top left, with it partially cut off, so you can’t actually use it, which again makes me think it’s an iOS issue.

it’ll open the library image picker all the way in the top left, with it partially cut off, so you can’t actually use it

can you send me a screenshot of this? maybe there’s something i can do w css mediaqueries 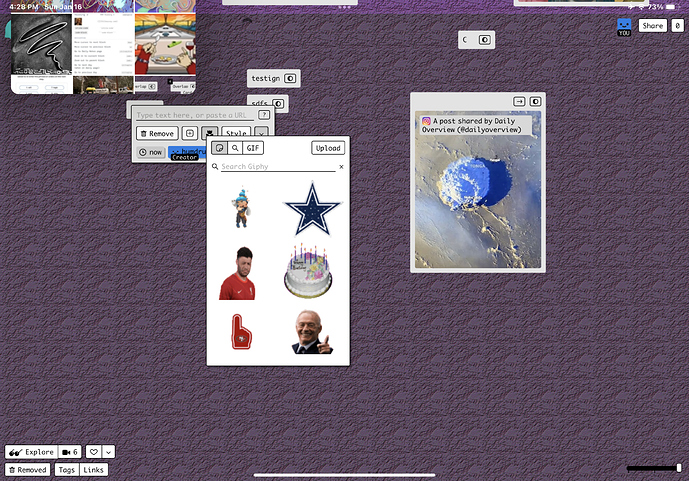 Here you go, you can see three squares of images in the image picker in the top left corner. The “Add” button to actually upload is completely offscreen.

whoa ya def looks like an ipad os bug. is the photos picker supposed to be near the upload button, or is it supposed to always be near the bottom of the screen (like iphone)?

Typically it comes up near the “Upload” button, like this: 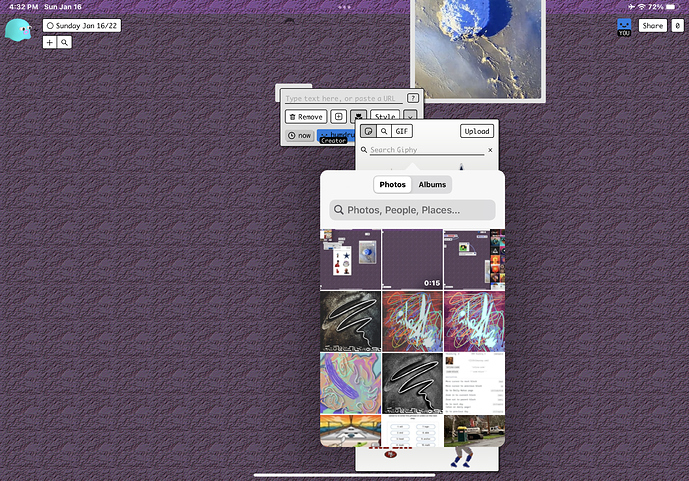 (This was immediately after, so just took a second attempt)