I made a little Kinopio mac app using Fluid (wraps a safari webkit view around a website). It seems to work, but I still want to play around with it more to find issues before releasing it.

Because it’s not an electron app it’s only like 2.5mb (vs 75mb+ for an electron version).

Also if you have an M1 mac could you let me know whether this runs natively or via intel emulation? Or if you’re running new macOS (Big Sur) can you let me know how it looks?

Here’s what the appIcon looks like in the dock:

And the app itself: 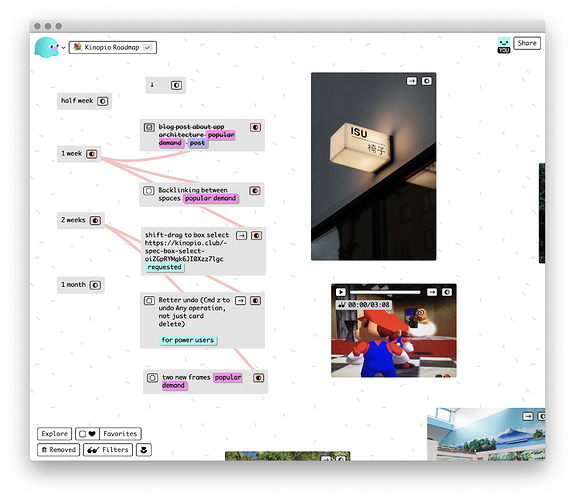 Download: https://kinopio-updates.us-east-1.linodeobjects.com/Kinopio.zip (unzip it and move it to ~/Applications

This is neat. I’ve been using a feature of Microsoft Edge that lets you save a site as an app. Then it behaves like an app which I can ⌘-Tab to. Prior to that, I used nativefier, which is an Electron-based wrapper thing. I’m curious where this one lands and what differences it has. When I try to run it, I get this message: 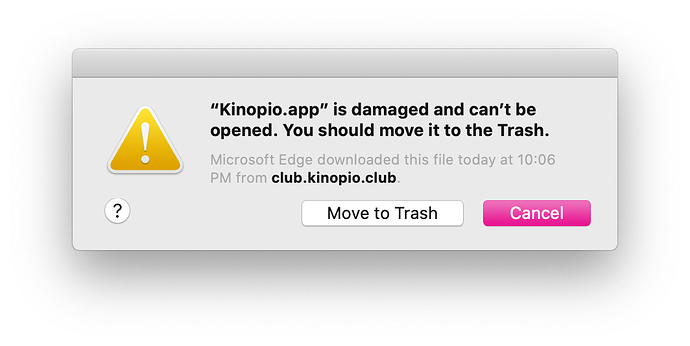 I thought it was Gatekeeper, but I am set to allow apps downloaded from Anywhere to run. (It still might be something with security, but not sure).

oh arg ya that doesnt look like a gatekeeper error

I used nativefier, which is an Electron-based wrapper thing. I’m curious where this one lands and what differences it has

Electron has the advantage of working everywhere and it’s easier to use. It’s a solid choice but it’s also relatively piggish on system resources/performance, trying to see if I can make something more efficient for the mac with a webkit-based wrapper

note to self: Tauri might be worth investigating and has a vue ci plugin https://tauri.studio/en/docs/about/intro

oh ya forgot to mention, over the last couple weeks I’ve also been working with the author of https://webcatalog.app (Quang) to add Kinopio there. It’s like a director of nativeified web apps, and Kinopio works pretty great on it.

There are still a couple little tweaks that I’m hoping he can make, but it seems nice to use irl. I’m worried if I say hey get the kinopio app for your computer from this other website that it’ll sound strange/off-putting to normal ppl tho?

I’m worried if I say hey get the kinopio app for your computer from this other website that it’ll sound strange/off-putting to normal ppl tho?

Could see that, but I think once people use the web version (which is pretty much always where people will start (unless?)) and they like it, it’s way less big of a deal!

It’s like a director of nativeified web apps, and Kinopio works pretty great on it.

That’s cool to hear. I’m curious what you find nice about it versus other solutions. As has already come up in this thread, there are many projects that all do the similar thing of wrapping a website into an app. Another one I’ve used is Flotato - lost in a sea of browser tabs?. More and more though, I’m using [the Microsoft Edge app feature]( Tips and Tricks Inside Microsoft’s Edge Browser | PCMag). The main thing I use any of these for is so Kinopio shows up like a separate app that I can ⌘-tab to.

Am I missing anything? Are there more desktop-y features that you are thinking about integrating?

nope you’re not missing anything, that’s basically the main functional reason. The non-functional one being that it may make it easier to get back to if it’s installed on your desktop (eg slack).

Nothing nativified etc. does replaces your Edge solution, this just makes it easier for others to do the same. And on my end, doesn’t require maintenance or updates of native app binaries.

I love this idea.

I don’t exactly know what I use Kinopio for, but I like connecting dots and Kinopio lets me do that

Hey maybe one day Kinopio can connect anything. 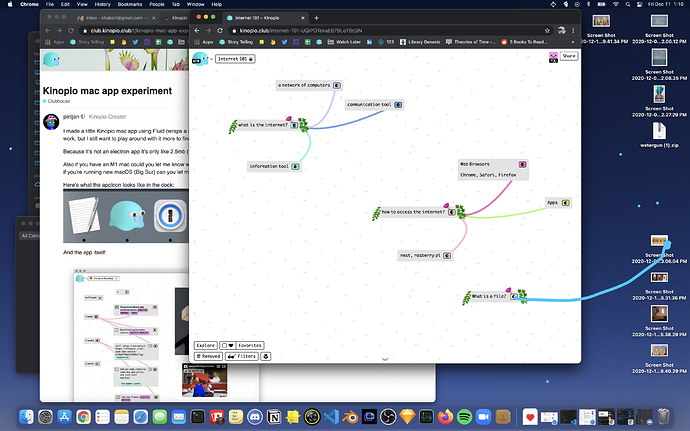 It would be amazing to link and make notes across the whole OS. Your comments reminded me of this post: A meta-layer for notes

Thanks for sharing that post. I went in with a negative attitude about hey and left with a positive one

love that he likes the note taking feature more than email.

i can’t quite put my finger on it, but i get a sense that Kinopio will end up doing more than just helping folks connect dots.

having a native OS app could be a step in that direction. for example, i don’t think a buddy list is out of the question. somehow show me all the other kinopio users on right now. idk even care if i can chat or see the username. i just want to feel less alone.

for example, i don’t think a buddy list is out of the question. somehow show me all the other kinopio users on right now. idk even care if i can chat or see the username. i just want to feel less alone.

first of all, lol that reminds me a quip I reheard recently how all enterprise software grows until it has some form of internal chat.

but setting that aside, I totally feel you. I had this really neat kinopio session with my team once where we were all generating ideas and making connections while brainstorming. I wanna experience that more…

i love hearing that. my hunch is that your brain storm session came about rather organically.

i almost never produce anything i like when i’m scheduled to do so. it’s the pressure and my dumb brain that thinks i’m important.

i think there’s lots of potential for kinopio to simply lower the stakes. it’s such a silly tool, we’re just playing around. this isn’t the real team brain storm. i haven’t sent that go2meeting webinar url download yet

I can’t remember the exact quote or source, but one idea I think about a lot is that many things that we see as standards today were seen as toys/casual things when they were new. Ruby on Rails, or Slack for example

@kevando, riffing your idea of connecting all the things, maybe less ambitious than an OS-level effort, but it would be neat to be able to use Kinopio as a layer for commenting, annotating a document, web page, image, etc. Here’s a quick mockup, using a screenshot of a post: 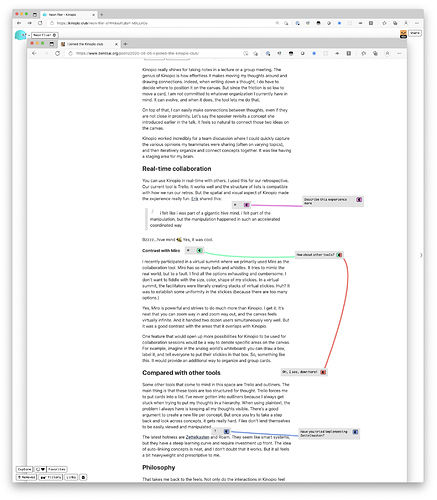 That’s a neat implementation of the idea, I think whipping up a script/browser-extension that takes a screenshot of the current page and makes a new space with that as the background should be buildable with the current kinopio api.

Love all of this!

Been using Kinopio on Mac too for a bit, through Unite, https://www.bzgapps.com/unite

Love having it as dedicated space, no issues so far 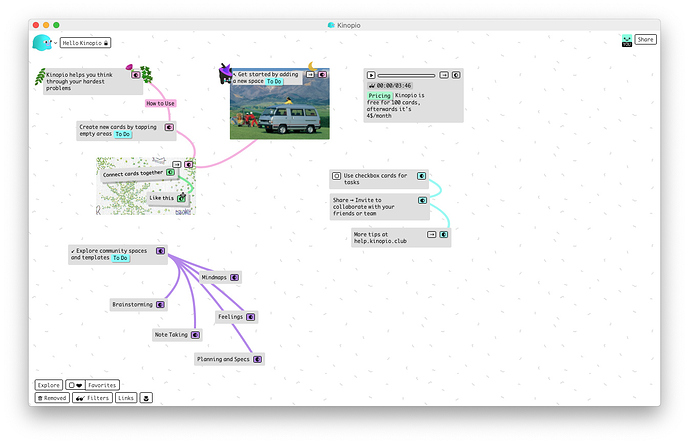 Welcome to the forums ethan

Never heard of Unite before – it looks v perfect for this