updated styling for bold and added support for inline code and codeblocks, hows it look?

it’s shipped so you can try it out irl

That looks pretty sweet, thanks!

I like the fact that you added a highlighter instead of a proper bold I think it would be nice having both of those i would use both of them.

for some reason the link is not working properly i cant link to a youtube playlist for some reason
have a look https://kinopio.club/topaz-scribe-h54aeAA9X3MrHD1g4fCcI

also the underline does not work yet

The &hidden=true at the end was throwing things off – if you remove it, the link should work

I added an example on your sample space.

thank you! i hope you can look into solutions for this @pirijan like automatically turning it off or alerting at least

also the underline does not work yet

in markdown _text_ does italics, not underline. (markdown doesn’t support underline I think)

the limitations of the approach I had to use make combining md very difficult - in exchange for higher speed and safety. The way md is implemented in a desktop app, or slow webapp, is completely different than what kinopio does under the hood unfortunately

A timestamp, for example.

I thought of maybe one more piece of markdown to support (not that you were looking to be writing more regexes): blockquotes. That is often rendered with a line like so:

how would you use blockquotes in the context of kinopio/cards?

It would be another way to visually set apart a block of text. Maybe particularly useful to distinguish text within a single card. Ostensibly for qutoes 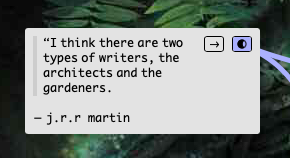 makes sense! i’ll add it to do longer-term

Can we revisit rendering markdown strong as bold if it’s something you can fix with your fontlab trial?

It’s a big task to draw every single character in bold thickness, it’d be nice to have but I think there’s other cool features to build before that

Cool!
I see the current plan is only for a subset of markdown syntax, but I wonder if there is a plan for integrating mathjax?

Hey freizhang,
I’d never heard of/used mathjax before but it looks interesting. Could you make a separate new thread for that and I can weigh:

also please do elaborate on how you’d use mathjax (or something similar like latex?) in your spaces?