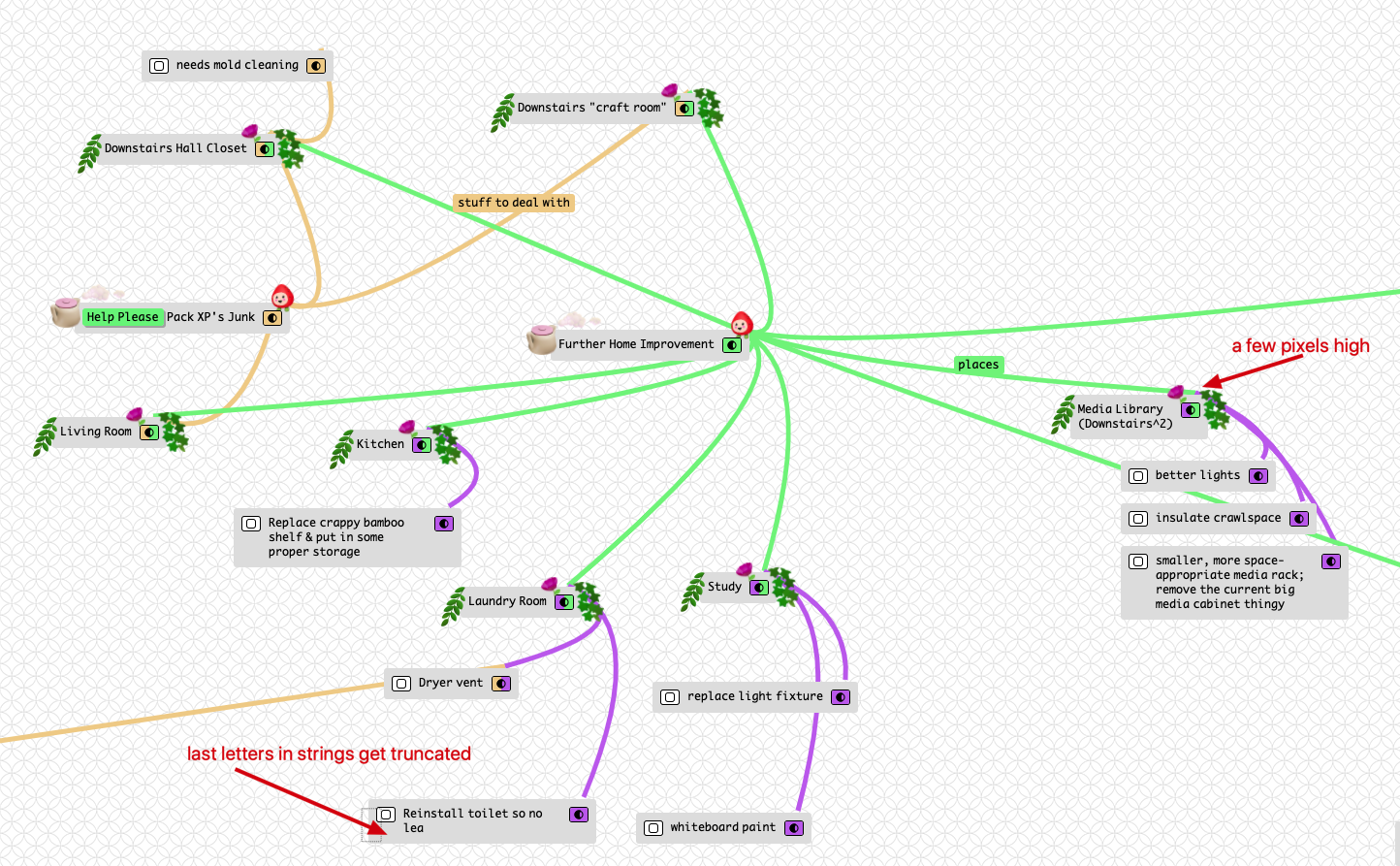 The offset connections can be fixed by selecting all and nudging all notes with the mouse. I’m seeing it pretty often, though.

Space name: Witches So Gay We Don’t Even Think Straight

First trip to Valley Falls
Reinstall toilet so no leak

hm ya looks like that’s indeed been saved in the db as Fear (huge adrenaline spik. I’ll check the logs later today to see if there’s any clues there

Got another one that I just found, and haven’t touched except to move a note.

In the space Which Rabbit Workshop

Will be deep diving into this as my main task tomorrow :), will report back

I don’t know if it’s the same problem, but it seems like it could be. I am in a situation where I loaded a space, and I found one of the cards missing characters from the end. 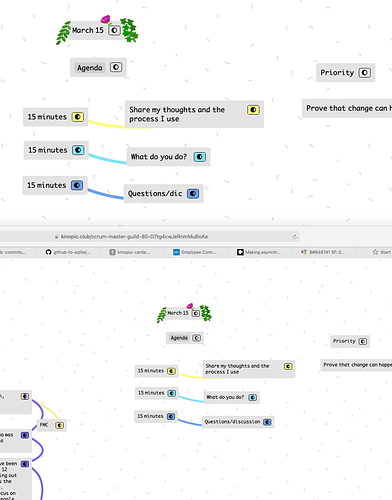 That’s what the second client and the server has, but on the original client where I created the card, its localStorage thinks that it is Questions/discussion. I assume if I reload that one, it will reflect the truncated card name. I’m 100% I didn’t explicitly delete “ussion” at any point. Let me know if providing the spaceId and permissions would help you troubleshoot. This happened in the last hour or two.

Ya spaceid would help a lot, and if private and you don’t mind sharing an invite link would be handy.

hmm don’t see anything obvious in the logs. It’s possible that it’s a connection hiccup or slow db issue that’s not being logged. I added logging name lengths when cards are updated, to be able to diagnose this better in the future

I’ve definitely continued seeing this across many spaces and it’s usually when I’ve reloaded the space after letting it sit for a while.

oh interesting that might be a clue,
are you collaborating in these spaces? Did you open them with multiple devices?

Some yes. Others, I had just created, switched to another space, and then found truncated strings when reopening the space.

I just noticed in my screenshots that the discrepancy was not a truncation issue. My one browser window (Safari Technology Preview) had Questions/discussion, which is what I originally wrote and this was the browser where I wrote it.

In another window of Safari Technology Preview, the name was Questions/dic. So “scussion” was removed and replaced with a “c”.

This space did have collaborators, but they were not actively or intentionally editing anything.

So the more I investigate this it’s looking more and more like this is related to server performance hiccups due to increasing use of kinopio, and not related to the size of the actual space (saving and updating cards is an atomic operation that’s independent from the space itself).

After the current crop of new features are complete, I’ll take some time to re-investigate db performance improvements and maybe buying a bigger server

due to increasing use of kinopio

Doesn’t look like this worked, I’m still getting broken lines.
https://kinopio.club/wings-unlimited-map-import-KZPFAnSW7fjEM2uSwbG4c had a bunch during editing, and I just saw a few opening it now. Kinopio was great for this btw, we were mapping a system of phone menus as part of an ARG thing. (It didn’t end up going anywhere)
There are also offset connectors on https://kinopio.club/5TQfh_3_3RI-q8tk1cxmV

If you reload the page does it fix the connection lines? Ya it still needs work tho

It does not fix them, they are like that on page load. The only thing that fixes them is wiggling the attached cards.