One of my biggest wants/desires for Kinopio is even more ways to organize and view groups of cards. To that end, I’ve proposed different ideas, like grouping, layers, spaces-within-spaces.

Many other apps have this idea of transclusion where you can have the same item in multiple places. It’s called different names: block references (Roam), portals (RemNote), mirrors (Workflowy). I think having such a feature in Kinopio would be game-changing.

Here’s a page from Workflowy about their implementation: WorkFlowy: Mirrors - A radical new way to organize your data It does a good job of showing why it’s useful.

I like their meeting notes example. Let’s say I’m taking notes and there are some tasks to do that arise from that meeting. If I could mirror these task cards, then I could put those cards in another space where my team is managing our work (like a Kanban board). This allows me to see the task in the spatial context of the meeting, but also let’s us manipulate that card in the workflow board in the context of all of our team’s tasks.

Generally, it lets you have different views for your data. I don’t have time right now to elaborate, but want to start the conversation and hear your thoughts

interesting idea, it’s like aliases or symlinks in a file system
what kind of use cases would you use it in? Does this address the same use cases as grouping, layers etc?

what kind of use cases would you use it in?

One clear use case for me is: I use spaces to take meeting notes at work. Often, we will assign tasks to various people on the team. Transclusion would allow me to take all the various todo cards on different spaces and include them in a Kanban board-type space. This space would allow me to coordinate this work with my team, moving them to different regions representing states (“in progress”, “more info needed”, “done”). At the same time, if someone needs more context about those tasks, they can link back to the meeting notes space. Once the task is done, and the owner checks it off, this state would also be reflected in the context of the meeting notes.

This is a practical example of the power of being able to manipulate the same card in different spaces.

Does this address the same use cases as grouping, layers etc?

I thought about this more, and no, it doesn’t. I was initially thinking, if I could transclude, I could create a new space with the cards I wanted to group, and use the space itself as the container. But that doesn’t really accomplish what I want because I really want the grouping to happen in the same space. ʕʘ̅͜ʘ̅ʔ

This does sound like a really cool, really power user feature that I’d like to do in the future. I’ll take some time to think about the right way to do this so it doesn’t become an eccentric-feeling feature that no one understands/uses.

If there are more scenarios, and other ppl who want this place +1 this thread with your own use cases.

Just seeing this for the first time with Ben’s notion link.

+1 but I don’t have great specific use case right now.

I tried using Kinopio for my daily work notes today, if I continue with that then it would definitely be useful as I take notes in a Daily space, but want to reflect those easily in another more specific project space.

I don’t think that use case has enough reasoning behind it to warrant the staying in sync over just copying the card.

Unless it somehow brought over connections and kept those in sync. Because then I could be taking notes and making connections in a meeting -> then mirror it in a relevant project space, continue to make connections (which sync back to the meeting), and then reuse that easily to prepare for the next meeting, which it could be built on again all while staying in sync with new connections in the other spaces.

PS Sorry for the unclear and non-concise rambling

PPS This is actually one of the features I use the least in Roam. If I could vote for my own related power user feature it would be around Tags. I love the tag feature and the little card that displays the spaces with the tag, but I’d love if somehow tags had their own page/space where that card lived, but where I could also have notes about the tag on it’s own. This is something I use A TON in Roam.

I previously said I didn’t have a use for this, but I have a few now that I think would be great.

The big one is a planner within a planner.

I keep them separate because I don’t like pulling up personal stuff on my work computer.

But I’d love for my work planner stuff to be reflected in the personal planner space so everything could be seen all together still.

Feel relevant for this discussion:

Curio is implementing something similar in beta they are calling “Synced Figure Instances”: https://www.zengobi.com/curio/releasenotes/?v=22

I don’t use since it’s Mac only, but feels like it’d be useful for reference/research/inspo given it’s another visual note taking app.

For me, the biggest use of cloning/mirror would be for task planning. I like keeping tasks in their original context but I also like to have them all in a separate planner space where I can cluster them, make connections and plan and prioritize. Having a list of 30-50 tasks is overwhelming. Having the same clustered in groups and just floating around in a space is a lot less so. Without transclusion, it’s nearly impossible to do in a way that is not frustrating or speed of thought/frictionless.

I know I can use tags for tasks but that just turns cards into an overwhelmingly long list of stuff (which is why Roam-likes didn’t work for me). This is also the same reason why I don’t like separate task manager apps like Todoist, etc. as they are just lists of lists, and I can’t physically manipulate things like I can do in Kinopio.

Curious how you would plan to interact with them or where you would want you task cards mirrored to if not a dedicated space that essentially turns into a master list?

Given the spatial nature of Kinopio and the work to add transclusion to a second space it feels like a lot more work than adding a task tag. Yeah it’s a master list, but I assume you’d maintain a master task space to mirror all other tasks to?

It does turn into a master list in concept, but the key for me is that it’s not in a shape of a list but more of a freehand kanban plus a pile of clustered things. 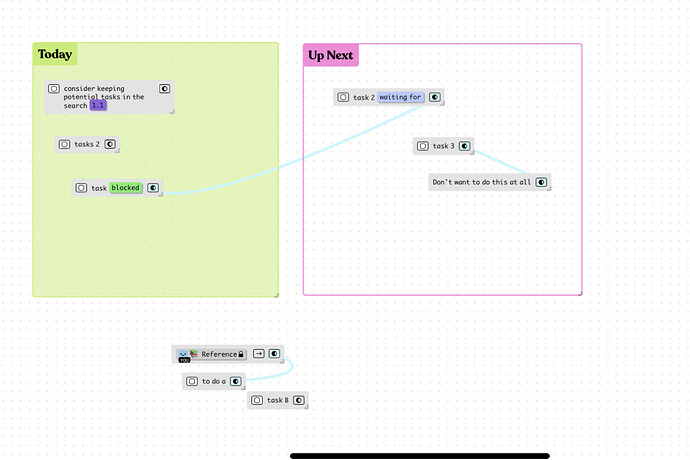 Plus it makes it super easy to add notes about tasks, to think through blockers and make visual connections that I’d have to keep in my mind or rely on back links (not much better) otherwise

So something like this would be your “Master Task Space” and all of these tasks might live in various other spaces related to projects?