More glue and structure to build with

(transferred from a discord conversation):

On the Muse podcast Pirijan was wondering about how a community coalesced around notion. I think one aspect is that there are pieces in notion that you can use as well as a way to build new constructs.

I think that is lacking in Kinopio, that is, users can’t create any workflows or more complex structures. So there isn’t as much to do and write about beyond the basic: here’s a space I made.

If you imagine the ability to group cards into a box, and cards would get tiled or auto arranged in that box. You could start to create a workflow where you move cards from box to box. And there is structure to support that, provide some guard rails and helps.

Yeah I just listened yesterday. And I think that’s spot on. Everything is pretty flat and linear today, which is part of what makes it great, but there is some dimensionality that’s couldn’t really open things up. The spatial canvas is great for thinking, but then how do I then use that thinking to build some structure around it.

My old Tag Spaces idea or cato’s Tags = Connections = Spaces kind of starts to move in that direction of adding dimension. Plus Groups and/or potentially ways to “build views” around card attributes so you could have multiple ways to look at a single space and easily flip between them.

These are admittedly extremely half-baked thoughts.

And most closely related to the space above: calendar functionality, which could go in so many directions. I’d love a calendar view of my journals, but I’d also love a view for that TV space to see all the shows laid out on a calendar according to the date I assigned.

Maybe a first step is “templates.” When I was creating my calendar, I was longing for a way to easily make my grid. It took lots of selecting and aligning between typing. What if you could have a calendar just automatically appear? Another thought on templates, the resizable image cards and locked cards are starting to make it interesting. Thinking of Figma/Miro where you can make blocks really easily, those help in collab sessions to provide wayfinding. You know I also vibe with your “views” idea/thinking

By templates, I mean a library of pre-built combinations of cards/primitives: a 7x5 grid you could use for calendar, better yet ability to define n x m grid, 3 columns for a kanban board, a 4-quadrant template, etc

Another thing I found hard after I had laid out a grid shape manually was editing the contents, like when I was making another week of dates. You can’t type some text and then tab over to the next “cell”, which in this case is a card. Kinopio has no understanding that you are working in a grid, so all the conveniences of editing a table aren’t there. That’s another case where “structure” would really help. 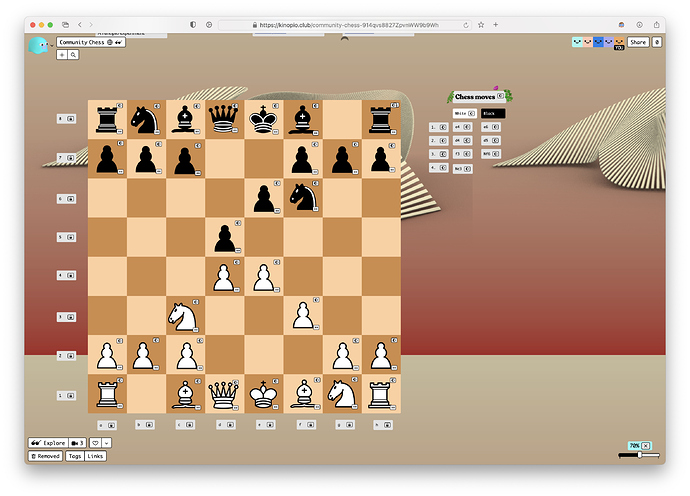 Some structures that would be nice for a space like this:

(A minor annoyance is that the spacing between cards you get when aligning and packing them is different from the default space you get when hitting enter on a card.)

Here, I aligned the 3. and 4. cards with the align/pack function. But then Nc3 was created by hitting enter on the f3 card.

I feel like adding the ability to make lists would be incredibly powerful. There are so many instances where I want to make a list of cards. The essence is being able to have a bunch of cards that are easy to manipulate at once and stay neatly together. Imagine a trello list of kinopio cards that you can move around.

Sticking with that analogy—if you have lists, then you can do pretty much all of the basics of Trello. Then you can build on that. You could use multiple lists next to each other to make a grid.

+1 for lists - that’s basically half of my spaces

The more I think about this, the more I want to underscore it. When I was thinking about how I use Kinopio at work (Kinopio business/group/team plan dream features?), it occurred to me how many times having a list component would help me help others use Kinopio. Some examples:

Without having such a structure, I takes a lot of explaining to do this simple thing: “Create a card near that pile” or “Create a card and connect it to that other card”. And it’s not even a matter of knowing how to use Kinopio—the tool is too flexible that you have to define a convention/protocol every time. For example, we recently decided to have an area to keep track of PTO. I can’t simply say, add when you’ll be on PTO to that list. I have to describe to put it under so-and-so heading and connect it. If there’s no existing example, and someone comes to it, they’ll be asking, how are we doing this again?

I’ll have to think on this more (thanks for the feedback!). Right now though I’m not sure if it’s a matter of How to use kinopio but When. Like for the examples above, some of those might be a better fit for notion etc with linear writing, or a calendar app?. Kinopio is more for those thinking/brainstorming/meeting scenarios.

Kinopio biz wouldnt necessarily be about replacing all your other business apps (except maybe mural,etc)

I would say something like guides in photoshop would suffice for alignment. Basically you are able to place a horizontal/vertical line and have things snap to it, but it doesn’t seem to mix in very well with the sort of “theme” all the other features have.

Alternatively since there’s no rotation in kinopio, there could be a feature to make a card “solid” so you can paste in a picture of a ruler (this is inspired from windows pen tools) and have blocks unable to passthrough that card.

I would say something like guides in photoshop would suffice for alignment.

is this like the alignment guides and snapping in something like figma or sketch? (don’t need to be turned on or off, just kind of appear and disappear as needed if you’re moving something near something else?)

Like for the examples above, some of those might be a better fit for notion etc with linear writing, or a calendar app?. Kinopio is more for those thinking/brainstorming/meeting scenarios.

No, because Kinopio works the way my brain works

No, because I want to use Kinopio to brainstorm and think within the context of writing, calendaring, coordinating, documenting, etc. I appreciate the focus you are maintaining for Kinopio’s vision, but I feel like what I am asking for doesn’t dilute that. Making it easier to make and manipulate a list is already what many of us do already. It is not an “enterprise” concept.

Kinopio biz wouldnt necessarily be about replacing all your other business apps (except maybe mural,etc)

The examples I gave have a more business app flavor because that’s where I spend most of my time. But I’m not trying to push Kinopio to replace those kind of apps per se. The main thrust of this thread is that, if you enable users to build in a little more structure, it can really broaden the appeal and functionality of Kinopio. Give us more power to compose things and maybe we will be able to replace other apps in our lives (business or not).

i’m certainly not against that, it’s all a matter of priority, effort and timing

100% this. Especially when it comes to lists. I love being in Kinopio and I love making lists. And I don’t want my lists to live elsewhere, I want them to exist within these spaces where they can be brainstormed around/within/next to/etc.

I keep daydreaming about this https://us-east-1.linodeobjects.com/kinopio-uploads/E4suFJdo3esD1h8MY2byi/ezgif.com-video-cutter-3-.mp4 and think this would handle lists so well - keeps things aligned, easy to re-order, etc.–basically plopping an instance of the old todo manager Clear into a space– (easy in the sense for the user, not building, etc.) - I don’t actually know if this gets to where Ben wants to get to, but I’d still love it.

Yea, but to be sort of more general, I would say putting up a faded outline of anything as a card could also work. Sorry for missing this thread, my gmail is a bit messy at the moment

I walked by this board today and it inspired me. This is something that would be cool to build with Kinopio. It can already be done, but what if it were easier to lay things out in a grid and keep them there (beyond the existing alignment tools)? Perhaps containers that have particular layout schemes (list, grid, masonry grid, etc)? 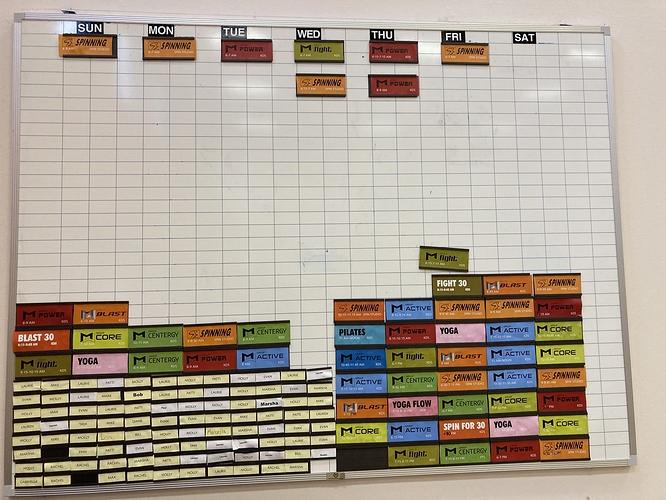 I prototyped a feature that showed guidelines when cards were aligned, below is just one visual treatment but i tried a bunch for various levels of attention-grabbing-ness. In all treatments though it felt like the alignment guidelines added rigidity to the thinking process.

Made it feel like i should be making a perfectly structured space instead of just jotting things down wherever. So I’m abandoning this particular effort