Search for Cards in Space

I started working on an extremely simple card search. for v1:

from the search project feature i built for Glitch years ago

With no search input, the ui displays your cards sorted by most recently updated. Answering the ‘What’s new in this space?’ question.

most of the ui is there , and the fuzzy search mostly works now. I need to wire together the components and sand off a couple rough edges.

Answering the ‘What’s new in this space?’ question

I think showing the editedBy user would be useful. I’m thinking of cases where there are a few folks commenting on a space, it would be helpful to see who created what card.

alrighty, if the card was created by someone else, then it shows the user 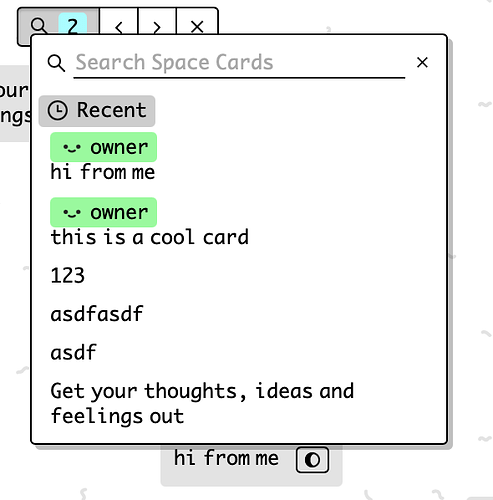 clicking to select results, both recent and searched for

it’ll of course scroll out of screen cards into view

little detail: list items have active state when their card is open

silently shipped it out, I’ll probably announce it formally tomorrow. let me know how it goes and if you find any bugs

I’ve used it here and there and overall it works great! On mobile especially (because lack of hover state) it can be a little hard to see where one card ends and another begins: 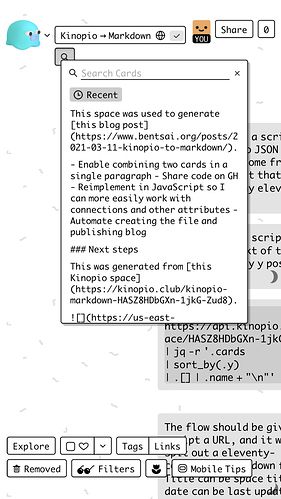 that’s true, I’m gonna try addressing this by relative times in front of each card. but if that doesn’t work, or is too noisy I might not address that specific issue for this release, because a layout solution here also needs to work globally for all lists

here’s what prepending short relative times might look like with better and worser card data. what do you think? too noisy for the job of searching? 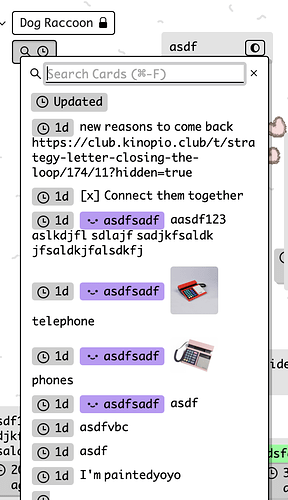 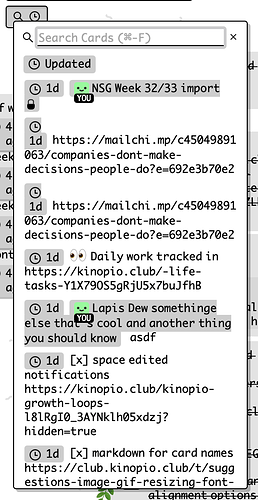 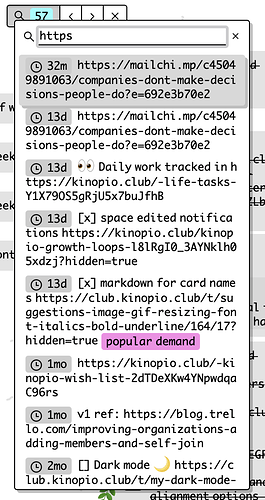 The relative date blocks do help, and I think having that information is super useful. My one complaint is that it feels too heavy. Is there a way it could be de-emphasized rather than currently it is emphasized. 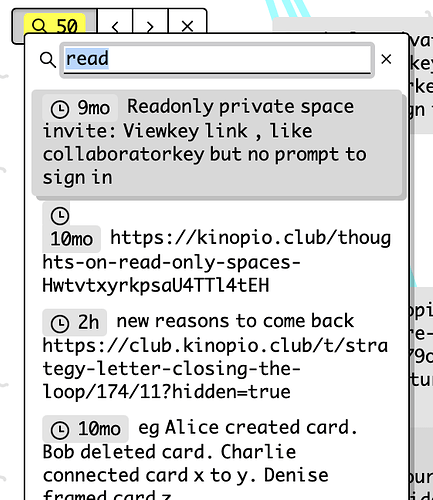 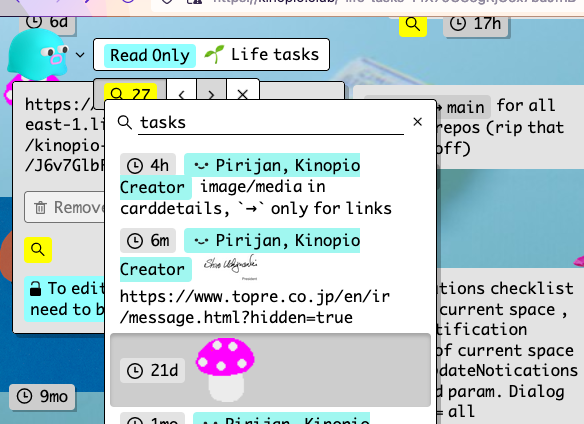 the results dialog feels uncomfortably overlapping the search widget underneath—does it need to occlude so much of it?

but I miss the longer more readable relative times on the cards. It’s a lot harder to parse when looking at the times on the individual cards.

I weirdly found the opposite. When I had a bunch of cards on screen and they all said ‘2 hours ago’, it seemed to take up a lot of space w redundant info and also increased the time needed to read each one. Eg 5 cards w ‘2h’ was easier to skim over than a bunch of ‘2 hours ago’ IMO

when the results dialog is open on top of the matching card, it is even harder to see where it is:

Not sure how to fix this. Maybe clicking a search result should close the dialog? (Which may also fix that overlapping dialog issue too)

(I do close the dialog on mobile and it feels p okay there. Maybe irl when you click a search result you’re pretty sure it’s the one, so you’re not too likely to need that dialog open still anyways)