To help grow Kinopio to financial sustainability, In about a month I’ll be increasing the cost of upgrading your account to $5/mo, and also adding a $55/yr option.

If you’ve already upgraded – or if you upgrade soon – you’ll be grandfathered into your current price of $4/mo forever.

Thoughts? I figure most of the people on this forum are upgraded so this won’t affect you, but with new user eyes on how do you feel about this? is 5$ too high, too low?

from the perspective of a somewhat new user (since late Dec)
I think $5 is justified considering there are more tools and functionality constantly being added.

but for most software, customers think that services with subscription models have too much leverage in terms of improving the service from what I’ve read on reddit posts and youtube comments about productivity tools, as well as 3D art and video/image editting softwares like C4D, Adobe suite, RedGiant etc

Can you clarify this part? What do you mean by ‘leverage’ here? thx

i’ve read these comments on an overview of RedGiant VFX and i’ve read similar sentiments at Notion’s reddit page. 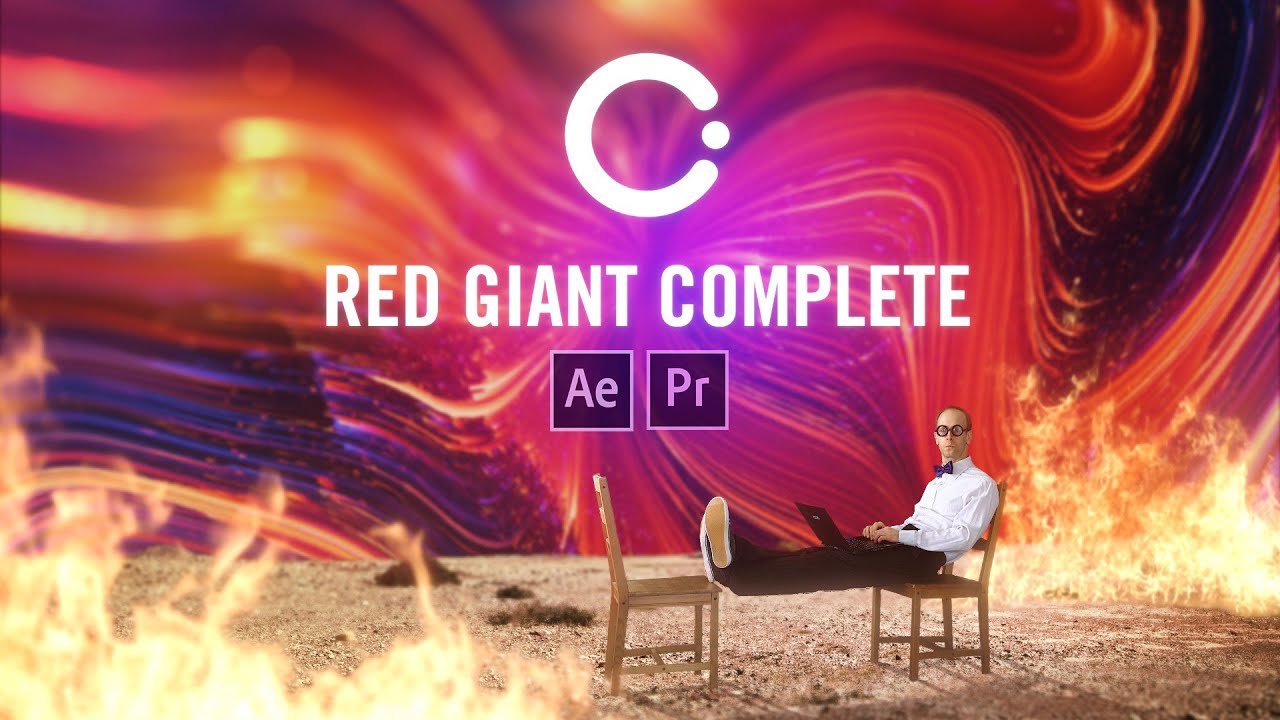 granted these software charge considerably more than kinopio’s reasonable pricing, i’d say some things apply to many subscription based models for software and i hope it gives you some insight on what people think of subscriptions. 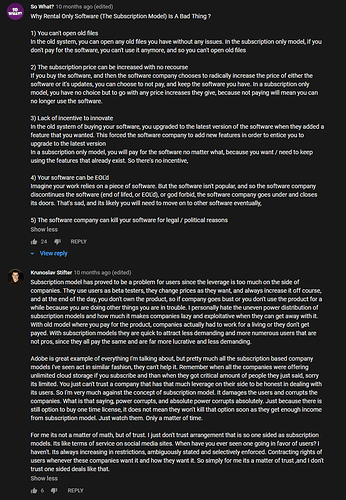 Some quick thoughts here (disclaimer: I’ve never tried to run a software business, or any business at all, but I do subscribe to things, write software, and watch Shark Tank):

ya stepping back a bit to the concept of subscriptions itself, I definitely understand the negative sentiments around subscriptions. And it’s made worse by some companies that make it easy to sign up and hard to cancel.

10 years ago it used to be able to sell professional software for a single cost, but those days are over:

In a way, it’s a lose-lose scenario. improving and maintaining non-trivial software on the web requires a subscription – or a single-time fee equivalent to 2-3 years of service (too much to charge in today’s market imo)

I general, I think you should use the product, but buy the creators.

e.g. Although I used loved Illustrator (was one of the finest pieces of software ever made imo), Adobe was a garbage company with a monopoly and no incentive to innovate well before they switched to subscriptions.

Yo, sorry to bump.

On the pricing page: https://help.kinopio.club/posts/how-much-does-kinopio-cost/ 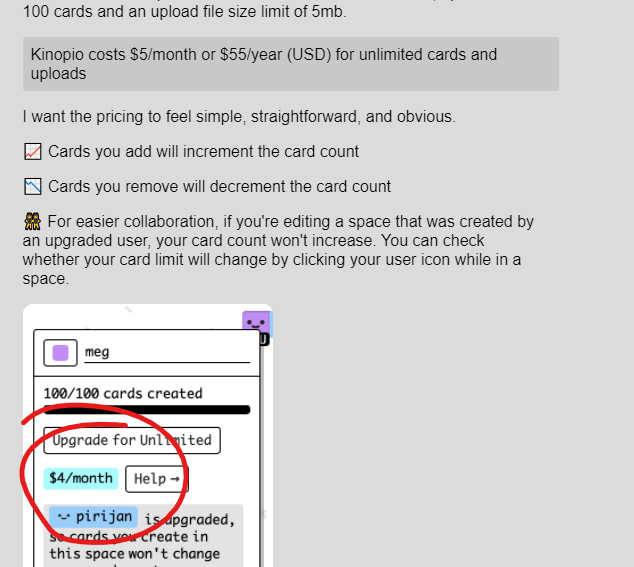 thx for the catch,
updating the image 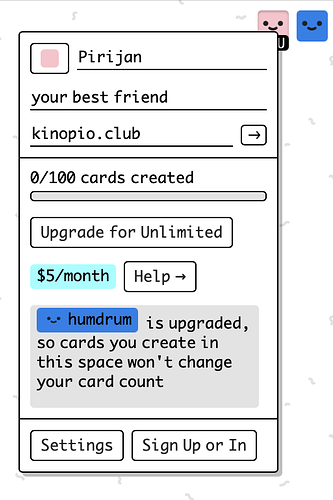 Noticed a trend in the App Store where apps are putting a pretty high price monthly, but their yearly comes in at a steep discount relative to the monthly.

Not sure if it’s a successful or sustainable approach, but thought I’d point it out in case there is data that might support this as a better model given how widespread it seems anecdotally (have not done the research myself though…)

Could also depend on the audience too, but thought it was interesting… an example for Kinopio based on this model and how you’ve approached it lately could be $8/mo or $60/yr to make the annual pricing even more enticing.

That’s because apple reduces their cut for yearly subscriptions after the first year (from 30 to 10% I think) - so apps are incentivized to overprice for monthly and really push you to yearly. Kinopio doesn’t have those incentives , so i price both the monthly and yearly at a fair price and am happy no matter which you choose