I hit this the other day with my team. We were running a brainstorming session, but then my colleague wasn’t able to create any more cards because they hit their limit. They had to go and delete some existing cards they had so they could continue to contribute. Do you think it makes sense to exempt these cards from a user’s count? My use case is that I’m an upgraded user, and I’m inviting people on my team to collaborate. It seems a bit too restrictive for “guests” for these cards to count against them in this context. Thoughts?

As a side note, it was difficult for my teammate to find cards they had created to delete some. Their only use is collab sessions with me. I didn’t have the opportunity to troubleshoot with them, but I was very suspicious of the fact that they hit the limit. I wonder if there is a bug there.

Wouldn’t it make sense for that user to upgrade? Like if they’re over the card limit it means they’re using Kinopio a lot.

Just like using Trello or something with your whole team, you would have to buy licenses for those ppl on the team. Kinopio doesn’t have an explicit ‘teams’ feature (yet?) so maybe that confuses the issue?

What’s your thinking on this Ben?

I think there’s precedent for the pattern described by Ben from tools that are used collaboratively by a “driver” – for example, Planning Poker Online and EasyRetro. I think there’s pros and cons to both approaches, but I’d consider per-user billing to only work well when there is an explicit teams feature: asking individual organisation members to manage their own billing is a significant barrier.

Personally, I like the idea Ben outlined, because I think it emphasises Kinopio as a collaborative tool that I can bring people into ad-hoc. Regarding costs / revenue, I don’t think it would reduce revenue: if I think about my usage of Planning Poker Online as a participant, if I had hit a paywall in the middle of a meeting – where I was using the tool at the direction of the driver – I wouldn’t want to sign up to pay (and pausing the meeting to get sign-off to make payment on behalf of the organisation would be a no-go). However, if I’m using a tool at the direction of a driver and then later on I feel inspired to use that tool myself because I’ve experienced its effectiveness, I could see myself choosing then to become a paying user to unlock features I liked.

So in summary, I’d love to see unlimited cards for all users in a space belonging to a paid member, otherwise an explicit teams feature where individual organisation members aren’t responsible for their own billing would be good.

I’ll look into making this happen
@bentsai if you’re able to give me the email or username of your collaborator(s), I’ll reset their card count

As a side note, it was difficult for my teammate to find cards they had created to delete some. Their only use is collab sessions with me. I didn’t have the opportunity to troubleshoot with them, but I was very suspicious of the fact that they hit the limit. I wonder if there is a bug there.

could they use the user filter to see what cards they made?

also while we’re here, what would a teams feature look like to you? what kind of features or capabilities would it have/enable?

Lol Sam explained my thinking perfectly (maybe you should post more of your ideas and then I can just nod in agreement:). I can add a tiny bit more color–

The way I use Kinopio with my team is I am hosting sessions and they are my guests. I am always looking for more opportunities to bring other folks in to experience Kinopio, but if they are gonna hit limits while we are working, that is going to give me pause to invite people to use the tool with me. So with the original policy, I feel like it is risking potential revenue by limiting this kind of collaborative usage by a paying member.

Now I think practically speaking 100 cards should be sufficient for most uses. I am still following up with my teammate to understand how they hit that limit. I really wonder if it’s a bug.

That’s what forums are for

Coolz, let us know how it goes

working on this slowly but surely,
some extra bit of info will be present under the user’s cardCount when they can edit a space that’s owned by an upgraded user: 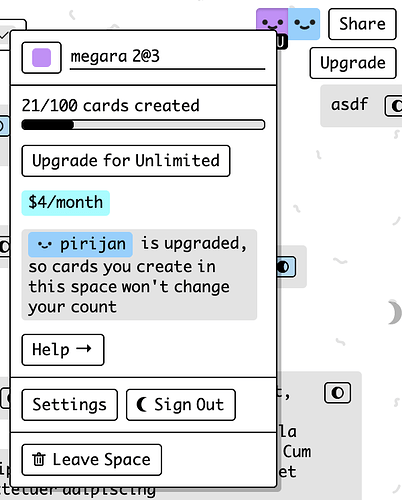 In terms of using Kinopio in a software team context, one use case I find myself wanting is better support for “commenting.” I wrote about it here:

The gist is, set the expectation for collaborators so they are free to comment on some idea/plan/design you have created. Make it easier to distinguish between the main thing and the commentary. I find that my teammates are hesitant to add cards to space because it feels like they are polluting the idea. They don’t want their comment to go on “the permanent record.”

i wonder if frames or tags could be used for commenting scenarios? If a team agrees on a convention like [[comment]], or a particular frame, or [[my name]] denotes a comment card? @ mentions also be a way to address this?

Anywho, one problem at a time I guess

Now Kinopio doesn’t increment/decrement card count for users in a space belonging to a paid member. This can be a private space that someone is invited to, or an open space that random people can edit.

Users can check whether their card count will change by clicking their user icon while in a space, as pictured above