How I'm using kinopio with lots of spaces

I thought it might be interesting to discuss ways we’re using Kinopio when we have lots of spaces.

Namespacing I am namespacing my spaces (e.g: {company}/{project}, sam/ideas, sam/future) so that it’s both easier to search/browse, but also so that when I’m creating a new space it’s clear how I should be naming it – reduces “should this be a new space?” friction

Emojis I am prefixing my space names with emojis, I don’t think this has had a huge impact but it’s nice to see at a glance that a space is archived because it’s prefixed with

– I’m currently experimenting with how I should use emojis, whether they should represent the type of space or if there’s a better scheme.

Home Space I created a space (called 🏡) and set my kinopio bookmark as a link to it. The home space contains a triage area where I dump all my thoughts / notes / ideas that I want to come back to and move to another space, this means that instead of having every space filled with “todo” type cards I have one central location to manage them and keep my other spaces ready.

(A common problem I encounter in projects (professional and personal) is that someone has a thought, they don’t want to lose it, so they capture it in its immature form in the same place that mature thoughts go, and the line becomes blurry.)

My home space also contains links to my other spaces, grouped by their area of interesting: this has some overlap with the namespacing, but it’s helpful to have a more freeform way to manage a directory of my spaces.

Thanks for sharing, Sam! I’ve incorporated some of these already since the first time we met

I’ve been using emojis in my space names as a namespace. I guess your examples of sam/ideas and sam/future are omitting them?

I’ve experimented with your home space idea. I’ve tried an “Inbox” and then also having a space per week for work (sample here). I also create scratch spaces too. And then I have a “digital garden” for capturing ideas publicly. So, I haven’t settled on anything – still experimenting.

My home space also contains links to my other spaces, grouped by their area of interesting: this has some overlap with the namespacing, but it’s helpful to have a more freeform way to manage a directory of my spaces.

That’s a cool idea I’ve been meaning to do as well. Have you found navigating to linked spaces from home preserves some of the benefits of laying things out spatially? For example, if you look at these linked spaces as children of your main home space, does it “feel” like you are drilling down into a topic? Would being able to zoom back out help with this? I just wrote down some thoughts in this regard so I’m really curious lol.

I’ve been using emojis in my space names as a namespace. I guess your examples of sam/ideas and sam/future are omitting them?

Yeah – I namespace and emoji but I’m still on the fence about the combination. I guess I’m using the emojis mostly because it looks cute… maybe I should just settle on that: they’re cute and bring a little joy, and namespacing is where the value lies. I think I’m clinging desperately to making emojis useful

So, I haven’t settled on anything – still experimenting.

Inbox is probably the closest to what I have. “Inbox” is probably a better name than “triage”!

Have you found navigating to linked spaces from home preserves some of the benefits of laying things out spatially?

I’ve found it very helpful because they’re logically grouped compared to the native list which is not, but I don’t think I’ve gained any thinking benefits from it… but I haven’t been considering that, I might be without realising! I’ll see if I can identify any other benefits I’m getting.

the informal namespacing approach is interesting (I also use emojis to make a handful of recently used spaces stand out in the list).

When it ships tomorrow, I’ll be curious to how tags changes things (if at all).

Another approach to namespacing I’m interesting in exploring is a ‘teams/groups’ like feature that an individual power user could put their own spaces into could function like a more formalized group. With teams/groups, designing it to work for both a lighter weight individual use-case and scaling up to a team-y one could be neat.

Perhaps alternatively, I could add tag supports to space Names. so [[my group]] my space would have visually stand out in the list with a custom colored tag. The awk part is how much of a tag should it be, what is the interaction with card tags?

relatedly, in my own spaces list, I have some special code that makes templates stand out so that I don’t accidentally edit them: 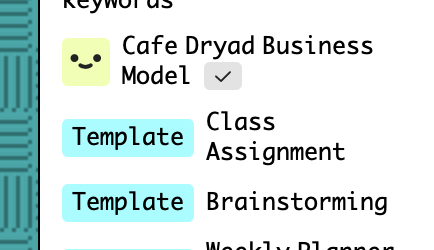 I am new to kinopio…jumping in to say “me too” as I commonly use emojis for naming my Chrome tab groups. It’s been highly effective for tab management and I plan to use it for my spaces, too!