I’d put that as a lower priority - my original mockup on top sounds like what you are saying, where you toggle between the buttons. The count is a great idea though.

Having two on the screen at the same time is still desirable for me, but I get it.

If it helps, my expectation is it wouldn’t have to work well or would essentially take over the whole screen on iPhone… but that’s besides the point.

I think a toggleable approach would suffice. 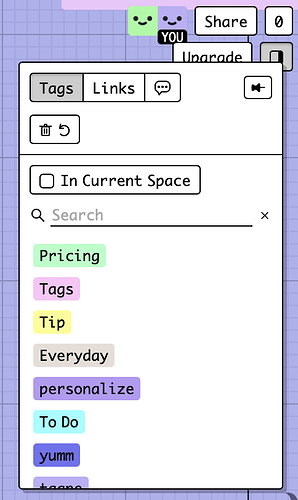 Loving every bit of this.

This is now ready for beta testing, let me know what you think!

Working well for me on iPhone so far.

One thing, not needed for launch as it applies to current behavior too, but I wonder if you could still do some UI disappearing on scroll, whether everything disappears or everything but the tag/link dialog…

I’m not sure which would be better, but the disappearing ui is something in pretty sure I’ll miss with…

sadly, that’s one of those is way harder than it looks things because each of the way the components are split up. Like the extra couple days of dev time might not be worth it in this case

An alternative I just shipped is if you pin the dialog, it’ll move upwards eg:

And yeah I get it. It’s not something I’d die on a hill for. Stoked for this to going into prd

unless anything wild comes up i’ll ship this tmrw morning

This happens in PRD right now too, but noticed when you select a tag from the dialog, it stays highlighted (button pressed) even as I jump to different spaces either from that tag or going to another space by other means.

I have to wait to fix that issue, feel free to file it seperately tho

I’m giddy with excitement at this