Here’s how I used Kinopio from March - December 2021! It’s kind of cool because many of the milestones and processes can be traced back to my Kinopio spaces.

I started using Kinopio at the very end of 2019, but returned in March 2021. My Kinopio restart began with usage at work, then to make the decision to leave work. After, it was used during my sabbatical period to aid me in learning skills, levelling up creative hobbies and creating projects! Then it ended with helping me get a new job.

Kinopio for work and thinking about not work 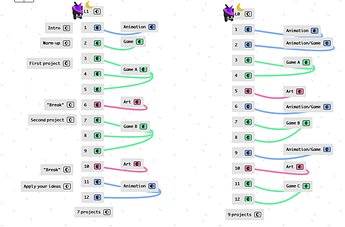 I used Kinopio for my work as a curriculum developer and educator. This involved making lots of spaces for writing lesson plans, taking meeting notes and writing emails. I was sort of the interim manager of my company, for rather complicated and unfortunate reasons, so I had lots of random stuff to do - which turned into messy braindump boards.

A lot of these braindumps turned into personal thoughts and eventually led me to decide on my resignation! Subsequently, I had loads of knowledge transfer and onboarding duties to do with the new hires, which I used my spaces to manage. 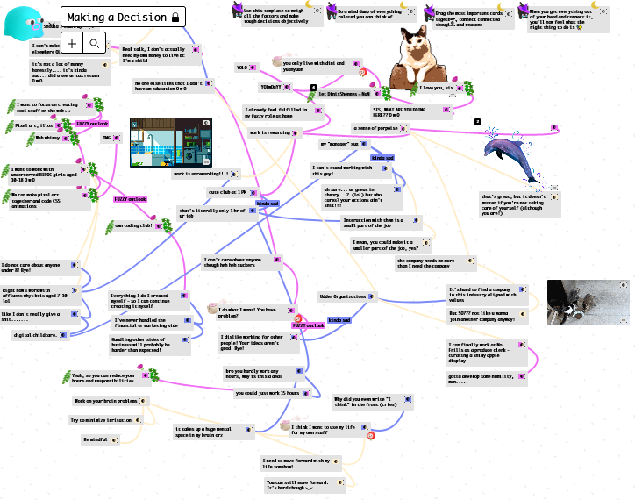 I made a lot of boards that looked like this.

On another note, I began stanning (being a fan of) the K-pop group OnlyOneOf. They have this high-concept interconnected lore, so I mapped out their releases here. 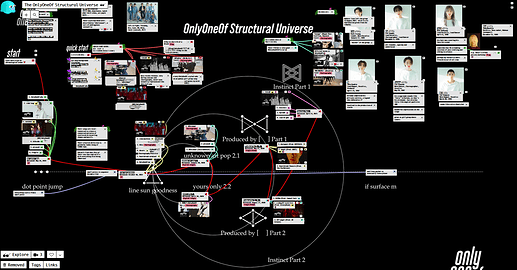 In May the funemployment really began. I had tons of things I wanted to do. I started making daily journal spaces, but didn’t find them that helpful.

I noticed a lot of spillover from previous days for tasks I needed to do, ideas I wanted to think about, links I wanted to look at, etc… So I opted instead for creating weekly journal spaces.

Since I could do whatever I wanted, not beholden to any people or deadlines, it was nice to schedule things by connecting them with colourful string, rather than lock them in to a calendar! It made sure things got done, but on my time. It was also nice to have an overview of tutorials and projects to do over the course of the week. 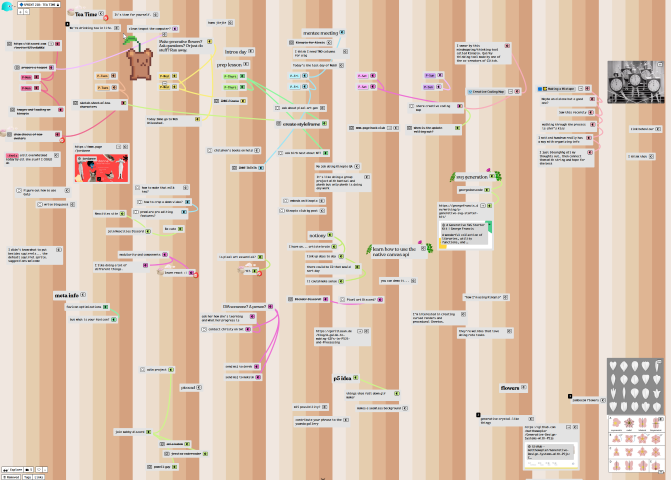 Example of a weekly space

Here are a few things I did during this time: 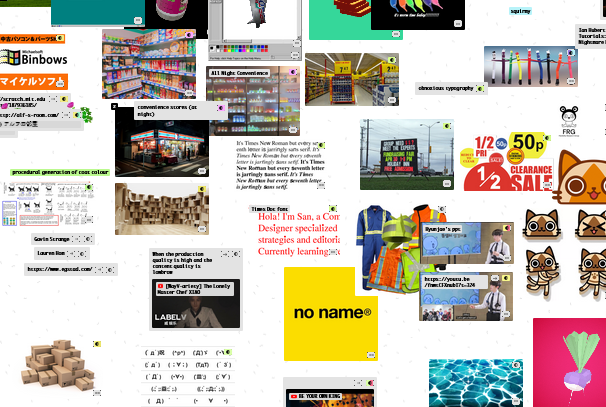 During these months, I continued doing more of the above. Design, illustration, creative coding, math, physics and more! I also started mentoring a student and we worked on learning Python together. 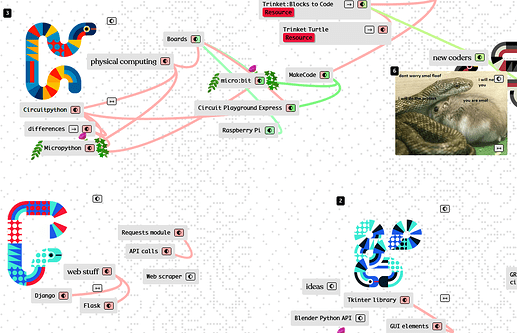 I made a blog. The blog is a thinly-veiled excuse to present the sick Windows 98 CSS I designed, and an exercise in designing a website. Hugo = best SSG! I just picked and chose whatever features I wanted to add. With Kinopio, I could play around with ideas I was thinking about. I made a Notion page for scheduling tasks I actually wanted to implement (part of a bigger, wackier, giant tasks database) and embedded the Kinopio space inside. 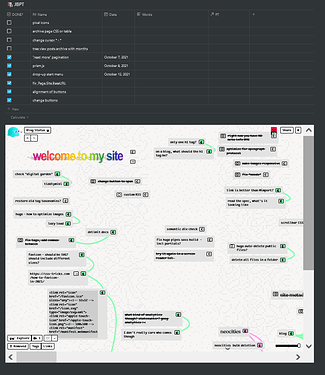 I went on lots of walks and befriended many outdoor cats. I became obsessed with a group of cats I found living in one area. I wanted to keep track of who the cats were. After tracking them thoroughly, I found over 30 unique cats! It was nuts. The situation is much better now; I think the cats have been re-homed. 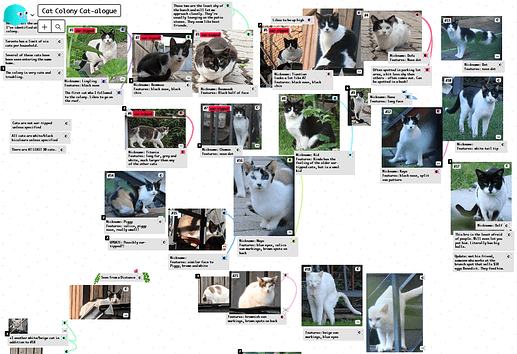 Also around this time, I discovered the infamous localStorage error.

But that helped me become more active in the community.

At one point I couldn’t stop thinking about agendas, for a whole week. This was interesting to use Kinopio to think about because I could compare my options qualitatively. 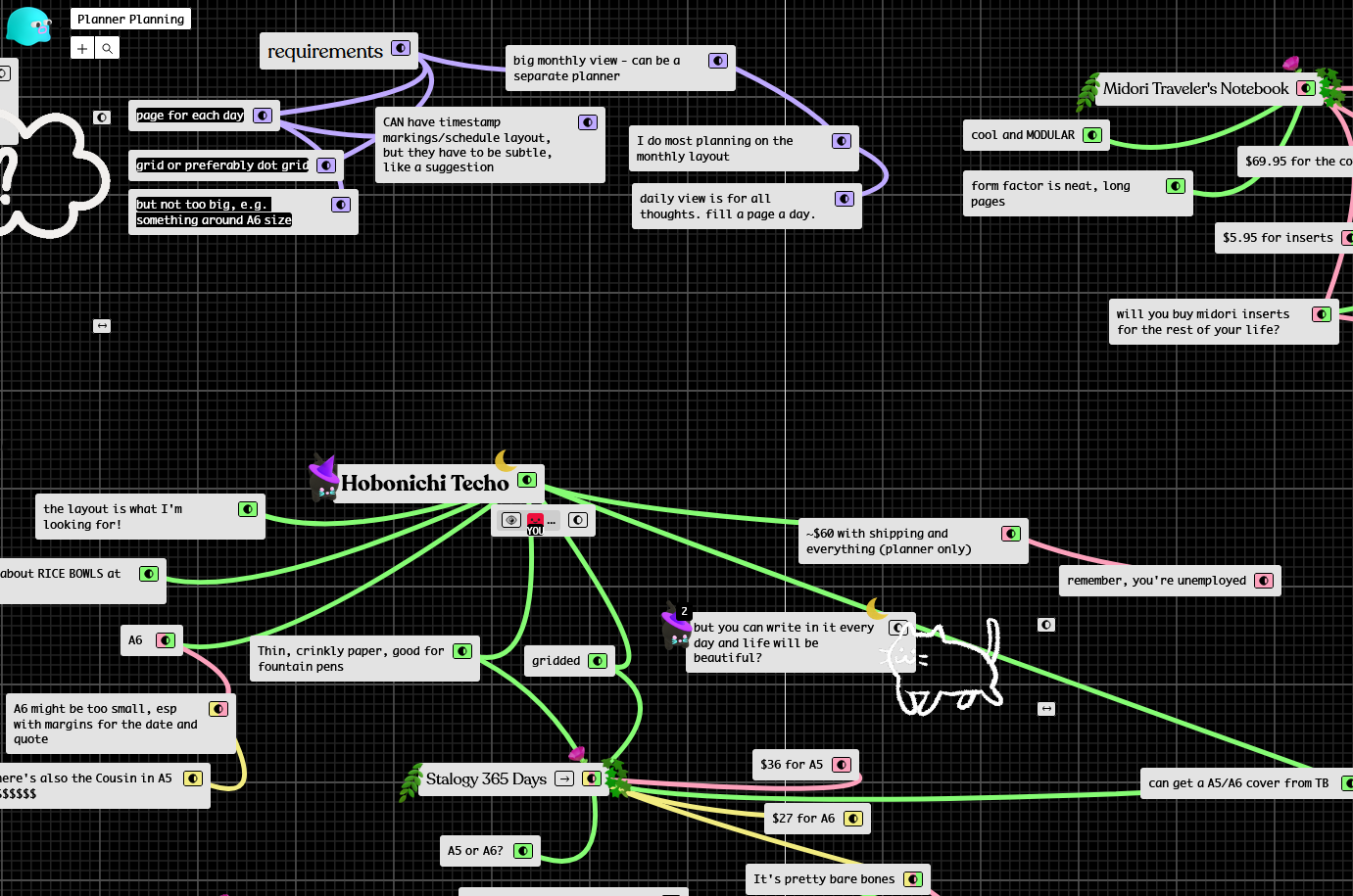 However, I realized I didn’t make the right choice, actually. To get the best of both worlds - to have a braindump space AND compare quantitative information, again, I used a combination of Notion databases and Kinopio boards to optimize spending! November 11th is 双十一 in China, where pretty much the whole Internet has a sale. I made some really good choices using the setup below. 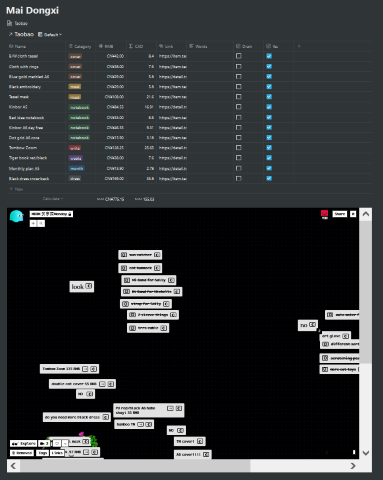 Embedded Kinopio space with Notion database. Intentionally potato-quality image so you can’t see how much I really spend on stationery

My sister finally got to go to Taiwan to study Mandarin and generally live her best life. I put together a board of activities for her to do in her 2-week quarantine and another to help loosely plan her stay. 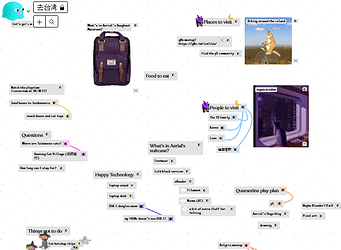 So by November I was sort of plateauing in terms of self-guided learning and generally doing stuff. I suddenly applied for a job, got interviewed for the job, and got the job. 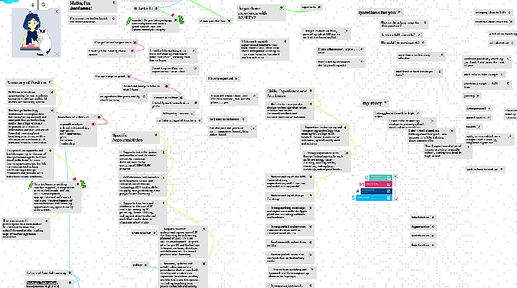 kinopio_interview_img850×474 89 KB
Notes for and during the interview

Planning applications and recording meetings are a great use of Kinopio! Especially since I find that meetings loop around and go in different directions.

It was fun. 2021 was good and Kinopio was with me along the way. I have been using Kinopio a lot less nowadays, but it really helped me organize and think about my life this year!

Thanks Pirijan for making Kinopio. Shout-out and thanks to Bentsai, the real MVP!

This is wonderful! Thanks for sharing.

This is an epic post – thanks for taking the time to make it @jordanne! This is so inspiring

Much of this resonates with me. Thanks for sharing many of your personal spaces, even at potato-quality (that’s a new phrase to me

). I have lots of personal spaces too that I want to share, but at the same time I don’t want to share everything because they are a bit revealing too. (That’s why sometimes I anonymize my card names before sharing a screenshot. I think that speaks to how flexible and expressive Kinopio is.

Your instinct to embed Kinopio into Notion is discerning. I think this area of interoperability with other systems is fertile. Imagine if you could make a card in Kinopio that syncs with a block in Notion. Oftentimes when I’m using Kinopio, I want to be able to view my data in a more structured manner: as a list, in a table, with more rigid hierarchy. What makes Kinopio great is its flexibility, so maybe this other view is not built-in (although it could be), but what if it syncs with another tool. Thanks to the API that @pirijan has provided, the pieces are basically there to do something like this.

I suddenly applied for a job, got interviewed for the job, and got the job.

Wow this is so cool to read! I’m so flattered that Kinopio was helpful in some really real sounding ways

I don’t remember if I said this before (or maybe I just thought it), but your blue hair looks super badass.

Shout-out and thanks to Bentsai, the real MVP!

Thanks! Yeah, for sure. Just tweeted here if you wanna QRT