A feature I would love to see if the ability for other people to “upvote” cards using emoji.

I’ve been playing with various tools designed to support co-creation when thinking through problems or ideas.

Getting feedback on ideas is really important. But if the feedback is purely verbal participants can hold back critique or feel pressured to like the bosses idea best and of course the issues around highest paid persons opinion (hippo) can influence the whole room.

To combat this and build confidence in working one approach we have used is to ask participants to apply simple sticky dots onto sketchbook / printed roughs to indicate if you like something.

You can even use multi colour dots to indicate agile type reviews with colours for Stop, Continue, Start etc.

When I started to introduce more digital tools into the ideas workflow we transitioned to using emojis to upvote or quickly indicate preferences to ideas and concepts in the same way.

Much like the sketchbook you are not permitted to upvote on your own cards. The application of the emoji should also be anonymous as well to avoid the above pitfalls.

Here is a very rough visualisation for Kinopio. Of course how you open the emoji panel and how you add a count to the certain emoji, could be handled a bit like Slack etc. 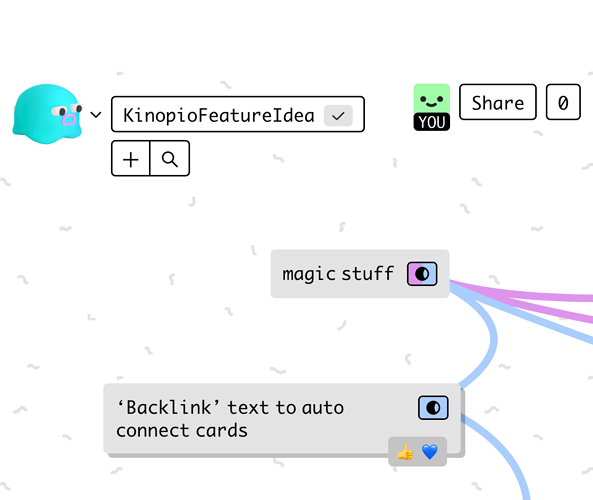 @adamprocter welcome to the forum! Thanks for the context around getting feedback in collaborative sessions. I’ve run many (with kinopio and other tools, analog and digital) and agree with lowering the friction and barriers to solicit feedback. The idea of adding reactions to cards is cool, I would definitely find that useful.

I’ve seen examples of people “hacking” this in with existing tools, so that’s probably a sign that there’s a desire for it.

On the note of dot voting, I’ve employed tags like this: 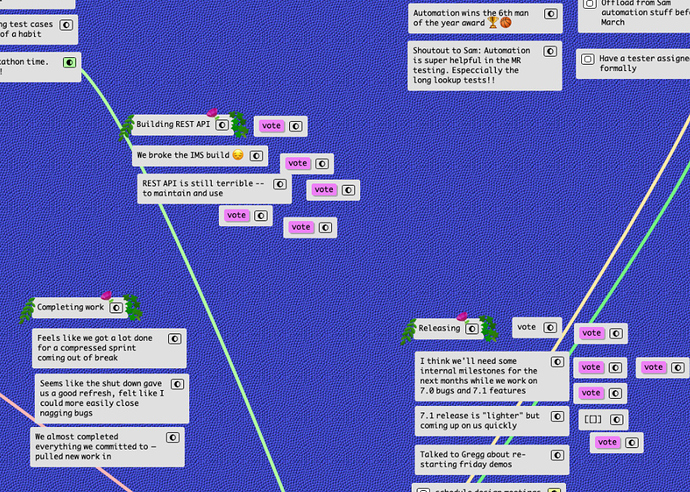 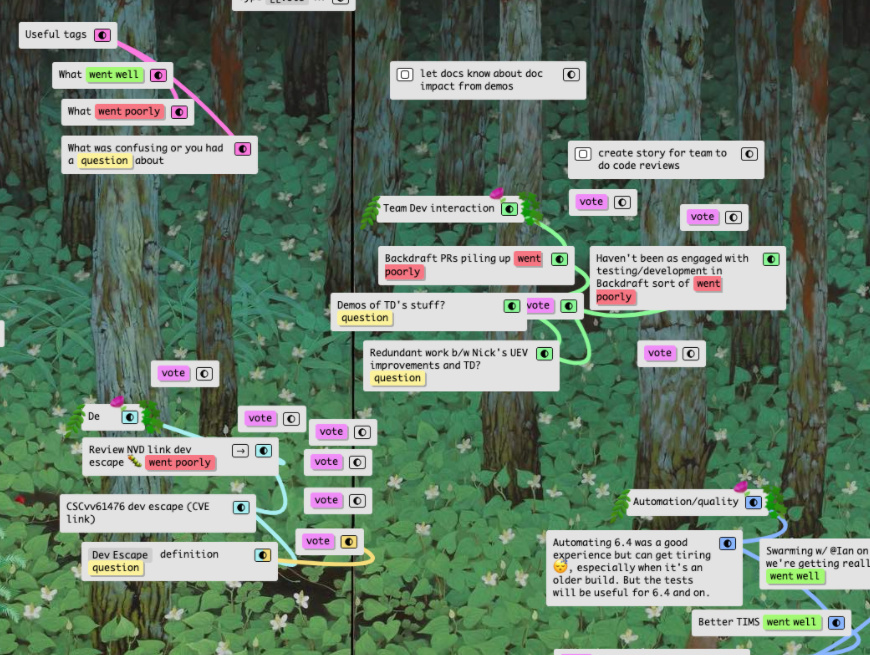 Thanks, those workarounds are nice and demonstrate what I am discussing.
I think for Emoji voting this is about getting anonymous and quick feedback.
If you want to give detailed feedback from yourself I would use a comment (be great if comment cards could be longer) - of course you can be anonymous by giving yourself a random name.
I think if you can include the whole emoji panel then do - I used the vue-emoji-picker in nodenogg.in as it was off the shelf good enough

It’s certainly a good time to revisit it

This might be a good candidate for a widget, too. It seems like something that only a small portion of users would want at limited times (I’m one of them!).

This might be a good candidate for a widget

widget = addon? (eg What would be your dream add-ons/power-ups/integrations?)

Yes, exactly what I meant

Would you expect either:

Any more upvote scenarios you could share? Is this only a collaboration feature?

We trying to use Kinopio to brainstorm ideas and voted on it. Our strategy didn’t work well… we created three cards and dragged lines to Yes, No, Maybe.

This is very much in my lane because I frequently collaborate with my team and do activities where annotating cards would be helpful.

I think it would be more useful to abstract this one level and not limit it to voting. Maybe a better term would be “reacting” or “annotating”. Voting implies assigning a positive or negative sentiment, but what if the solution were more flexible.

So one practical way is to react with emojis, similar to Slack or Discord. Then it’s up to the users to assign whatever semantics. For example, give the card a thumbs up to vote, or thumbs down to down vote.

Another use case is reacting, where you want to add a laughing emoji because the card is funny, or a heart to say, I support or love this.

With this more flexible mechanism, I see a big use case for non-collaboration scenarios. This would be an additional way to decorate a card and assign some semantics, similar to how frames work.

I’m not sure how to handle being able to add any number of arbitrary emojis though. That’s tricky. Maybe they start to stack, or are contained in a box. Maybe it doesn’t have to be emojis per se but generic shapes, and a limited set (triangle, square, circle, a la playstation controller buttons)? Starting to brainstorm here.

In terms of permissions, it seems like another case where you would want more granular permissions so that guests can vote but not edit cards. (btw, this is same kind of permissions I want for comments, but that’s a separate thread/conversation which we’ve started;) ). But since we don’t have granular permissions, I kinda think this needs to be limited to Open to All spaces or collaborators. Otherwise that violates the expectation that Public Read Only is not entirely read only.

I kinda think this needs to be limited to Open to All spaces or collaborators. Otherwise that violates the expectation that Public Read Only is not entirely read only.

Agreed. I wouldn’t want cards in my Public spaces getting votes / reactions unless it was an Open to All space or a space with a collaborator.

ya sounds like it makes sense to tie voting permission to space edit permissions (if you can add cards to the space, you can vote)

RE emojis,
is choosing every emoji a requirement, or would it be okay to choose between a predefined list of 5 or so? (like github/instagram/facebook reactions)

I was jumping back here to see how this feature was going. A handful of emoji is fine. It is kinda fun when people can pick anyone they like but I think the ability to upvote in this fun way even a little would be a great addition.