I’ve heard before that one of the main things some new users want to know is how to make a fresh new space/document. Not all discover the ‘+ add’ button in the spaceDetails dialog.

Here’s a quick experiment that puts an additional ‘+’ add button next to the space name:

i wonder if the extra noise/interface is More complicated irl 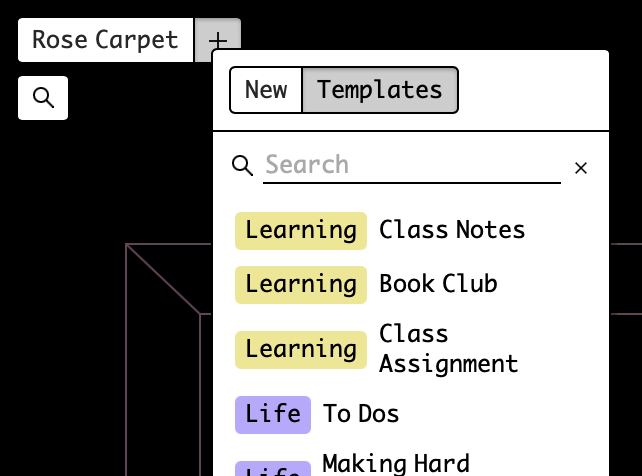 From the static images, this seems like an improvement.

Aside: I wonder if adding a keyboard shortcut for creating a new space would be warranted. Pretty often I want to create a new space to jot something new down. Right now that takes some mousing and clicking.

What should it be? Cmd-n seems obvious but conflicts w the browser?

maybe just a bare n? most of the webapps I thought of use single keys (gmail, github, trello), or a combination (g i for go to inbox), but there isn’t enough functionality to warrant that.

ok will add a n shortcut that makes a new space

edit, hmm ‘n’ is actually new card on trello. there doesn’t seem to be a new board command. In general though, I think having a one key shortcut that ‘appears’ to totally wipe the current space might cause problems…

moved the + button next to the search so that it’s position isn’t dependent on the length of the space name (easier to find), and also to ensure that the button is always accessible on mobile

In general though, I think having a one key shortcut that ‘appears’ to totally wipe the current space might cause problems…

I have this concern too. One mitigation is to make sure that after hitting n that the back button works reliably so you can easily get back to where you were.

I agree moving it to where the button location won’t change depending on space name is good. Let’s see how it plays, but combining it with the search button feels weird conceptually. Searching is for operations inside the current space, whereas the plus is one level above that. Could it be confused for an “add card” button? Might be fine though.

I like the buttons next to each other a lot. (But also would love to see keyboard shortcuts for new spaces - one for new journal space would be cool to, but less important).

What do you think the shortcut should be? Maybe something that uses ctrl and shift and a letter ?

I’m not much of a notion user, but I just pulled it up, and surprisingly, they override ⌘-n for new page.

They also have / commands, so if you’re in a notion page, you type /page Enter, this creates a new page too. This reminds me of the command palette dialog that a lot of apps have (like VSCode, SublimeText, etc) where you hit ⌘-P (or something), then you can type a command. I know you have mentioned that before @pirijan so maybe something to consider.

This would also make it easier to extend. Other things I’d like keyboard shortcuts for are opening up my favorite spaces, Explore, and maybe the global notifications dialog.

hmm it looks like cmd-n is only for the desktop/electron app. it won’t work when running notion in browser

yup cmd-k in kinopio is meant to act like cmd-p jump to files in sublime. (I used cmd-k because that’s what slack uses and I figured that’d be the more commonly used of the two)

sublime also has a cmd-shift-p brings up the command pallette. I built something very similar for glitch, but I don’t think a lot of people used it irl.

hmm it looks like cmd-n is only for the desktop/electron app. it won’t work when running notion in browser

yeah, I saw that note. but when I tried it in Vivaldi, the shortcut worked. maybe notion is not detecting Vivaldi (Chromium-based) correctly. I just tried with Edge, and the shortcut doesn’t work (opens new browser window as expected). that would be bad to override ⌘-N anyway.

got it. I think given the small number of shortcuts currently, I’d prefer n, as long as testing proves that it doesn’t result in accidental activations.

I’m probably an outlier, but I use the favorite spaces dialog a lot – it’s kinda like bookmarked spaces. that’s why a shortcut for that would be nice. I noticed that even when I just used the built-in tabbing and focusing controls ability in the browser, when I opened the dialog, I couldn’t directly hit up/down arrow to get into it. Probably need some code to set the focus to the list once the dialog is opened?

Maybe the first time you press n you get a dialog box telling you you’re creating a new space, which includes a checkbox to choose “don’t show me this anymore”?

Another keyboard shortcut that would be awesome (stealing from Roam): Ctrl + Shift + D to take you to the current day’s Journal space.

I know right now you can actually have multiple with the same name so it wouldn’t work great, but if there was a way to search for the current day and open the oldest one with an exact match to the naming convention Kinopio creates it could work…

if you navigate to https://kinopio.club/journal, it will re-direct to the current day’s journal (or create a new journal space for today if it doesn’t already exist). so what you describe could work if it just navigates to that URL.

Forgot about that! Yeah, that would be perfect if the keyboard shortcut could do the same thing!

I know I’m rambling like a madman at this point, but I wonder if there is a way to have something like https://kinopio.club/humdrum/journal so I could share a link and then anyone can view my most recent public journal page at any point in time…

I wonder if there is a way to have something like https://kinopio.club/humdrum/journal so I could share a link and then anyone can view my most recent public journal page

it’s of course technically possible, maybe we should split these journal specific requests into their own thread though