Allow you to specify an image for use in a card

An API for accessing new AI models developed by OpenAI

Depending on cost, this may be a feature that’s only available to paid users. 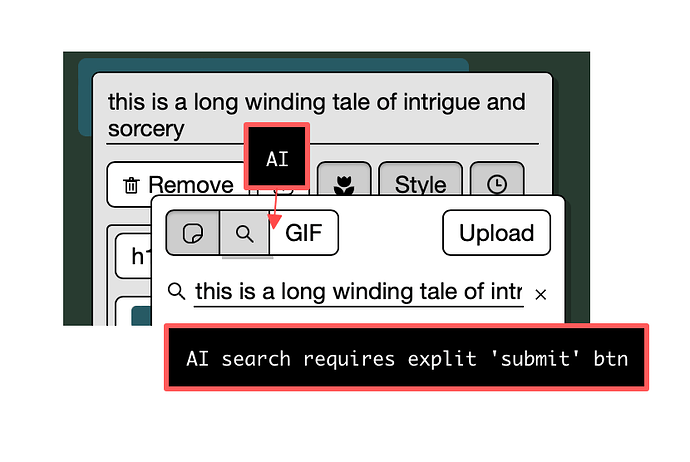 One use case: I was creating a presentation with kinopio this week. I wanted some interesting images to go along with what I was saying. Used the existing GIF search and that worked. Having an AI generated image would have been a cool option. 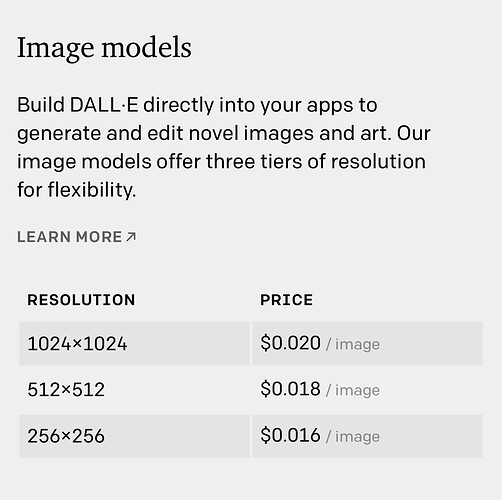 FYI on what I could find about pricing for devs.

For me, it’d just be a cool way to decorate spaces with weird images.

I use ai as one of my potential tools when creating my dumb design graphics so besides just decorating spaces, I could see Kinopio as a little design workshop for me, where I bring in inspo, fire off a few AI images, come up with various blocks of text (ai text generation is an option on OpenAI dev API too

) all to brainstorm and collect in one place.

I haven’t done any prompt generation myself, but I’ve seen others do it. Kinopio affords making different combinations of descriptions. Imagine you have a bunch of ideas, descriptions, etc. And then you can quickly mix and match them to submit to DALL-E. 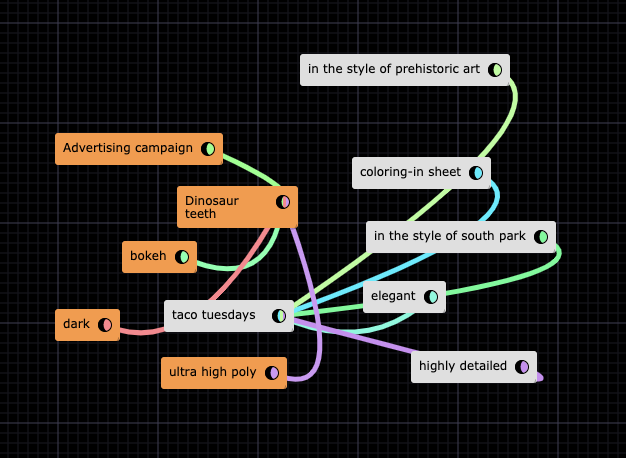 how do you envision the interaction of creating an ai image from multiple cards working?

Then it would create a new card using the words as a prompt for the image to dalle.

there are a couple reasons why I think generating images from cards directly like this might not work so well in practice:

My biggest concern is regarding pricing. Some back of the envelop math:

A person would only have to generate 330 images to make them free, and could go on to make a lot more. So there may need to be a limit, but I don’t want to over-engineer limitations in the first release. 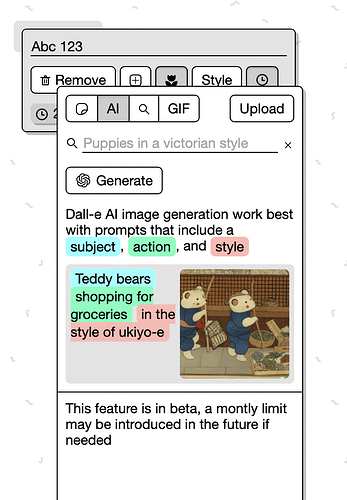 the raw ui , ready to hook up to dall-e

I would definitely put an image cap - don’t think people would rush to use their allotment every month, but tough to know for sure.

Being able to see history would be cool.

I don’t feel strongly about this, but to clarify a few things: I don’t think the cards and image should be tied together or be blended in any many.

Once you use the multiselect → it creates an image card that would act and behave just like if you went through the standard route and the query would be edited in the same manner - so if you used five cards to be your prompt, changing them or deleting them would have no impact on the image.

But again, I don’t think this is needed.

Do you have thoughts on dalle vs stable diffusion? In my tests sd produces not as good results but try them both out and let me know what you think.

What do you think of the results from 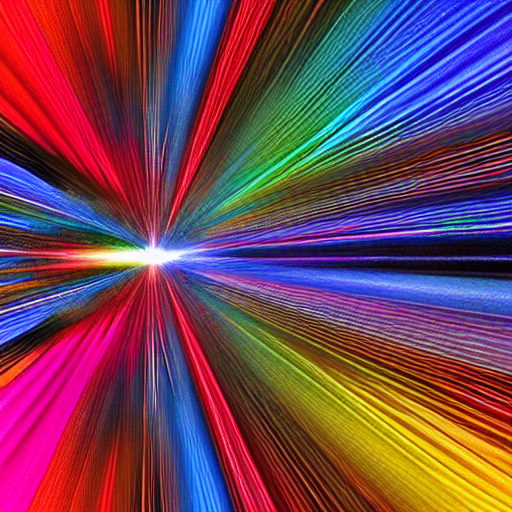 stability-ai/stable-diffusion – Run with an API on Replicate

The advantage of sd is that I wouldn’t need usage caps because of the much lower pricing, and possibly also wouldn’t need to limit it to paid users

re limits, as a kind of freemium thing try giving free users n(10 or 20?) free searches per acct, and then upgraded users get 100 or 50 searches / month

This feels like a freemium feature to me. I’ve not gone the rabbit hole of image generation, but Kinopio feels like a great place for people to fall down such a hole. It is a visual platform, easy to create an manipulate text. And a limited number for free accounts feels right. Enough to dip your toes and see how cool it is.

Once you use the multiselect → it creates an image card that would act and behave just like if you went through the standard route and the query would be edited in the same manner - so if you used five cards to be your prompt, changing them or deleting them would have no impact on the image.

I was thinking the same thing. What were your philisophical concerns, @pirijan ?

I could see a few options with the output:

Yeah, I feel like 10 for free, 100 for paid would be a good approach. I could see it barely getting used, but I could also see people trying to take advantage, so good to have those controls.

In terms of output (from Ben’s message) I was thinking something like the third option. It’s an image card, but if you clicked the card and clicked the AI button, the prompt would still be there so you could potentially adjust and regenerate. I don’t think the two card approach (one image, one prompt) is great…

And in testing, I haven’t loved my initial tests with Stable Diffusion when doing side by sides, but since it’s more of a fun/brainstorming type tool, I don’t think it would be that big of a deal if the cost is really that much better. But my vote would still probably be for Dalle2.

I can do this , but is there a time when you’d want the old prompt to not be there anymore? eg you do a search , pick an image, all is well. But then you make a new card and write something like a prompt in the card name, based on how other image searches work it would be expected/desirous that the prompt textarea would be pre-filled with the current card name

In the latter case, there will be a way to see your AI image history and copy the old prompts to use again/adjust 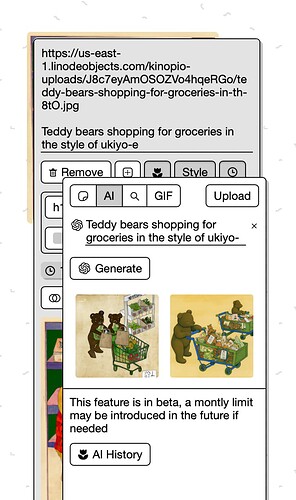 RE text cards and image cards being separate things:
Here, I’m referring to the Purpose of each.

I could see it barely getting used, but I could also see people trying to take advantage, so good to have those controls.

I agree, I could see it going either way, and because I’m saving the AI prompts and images for each user I’ll be able to statistically model trends/usage if I need to later. In the short term I’m using this data to provide the AI history ui